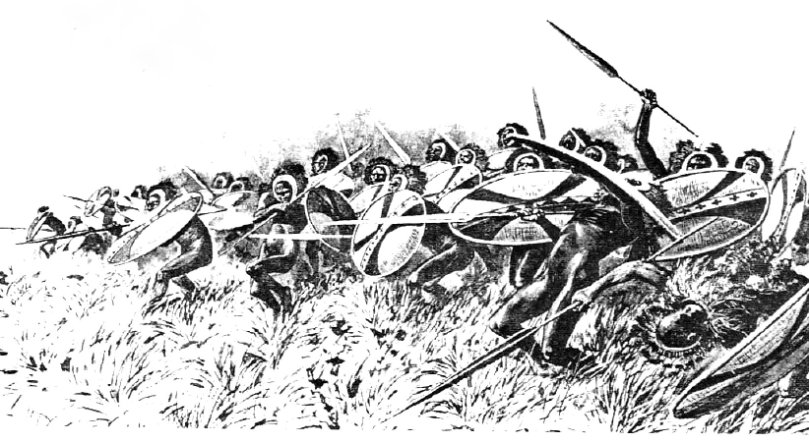 Following on from Mr Miller’s prosaic description of the Masai let’s look at a little more background about these East African Pastoralists.  An excellent resource for the Darkest Africa gamer is the book “A Military History of Africa” by Timothy J. Stapleton which includes the following brief description of the Masai. The book itself gives a wide ranging coverage of all things African in this period and perhaps is the next best thing to the Foundry Books currently available for a full treatment of the subject matter.

Sometime before the 1700s, Nilotic-speaking pastoralists began moving south from what is now South Sudan into the grasslands of present-day Kenya and northern Tanzania. In a military process, existing communities were pushed off the rich grazing land. Believing that they were the legitimate owners of the entire world’s cattle, their military activities revolved around livestock. Pure pastoral communities with cattle focused on protecting them, while those without attempted to build their herds by raiding.

Lacking centralized state structure, East African pastoralist groups were governed by councils of elders and organized on the basis of military-oriented age sets. During their early teens, young men endured a harsh initiation that included military training. As young adults, they were full-time warriors and herders. Young warriors formed something like a standing army and lived in their own camps, where they ate only beef, blood, and milk because other foods were thought to make them weak. 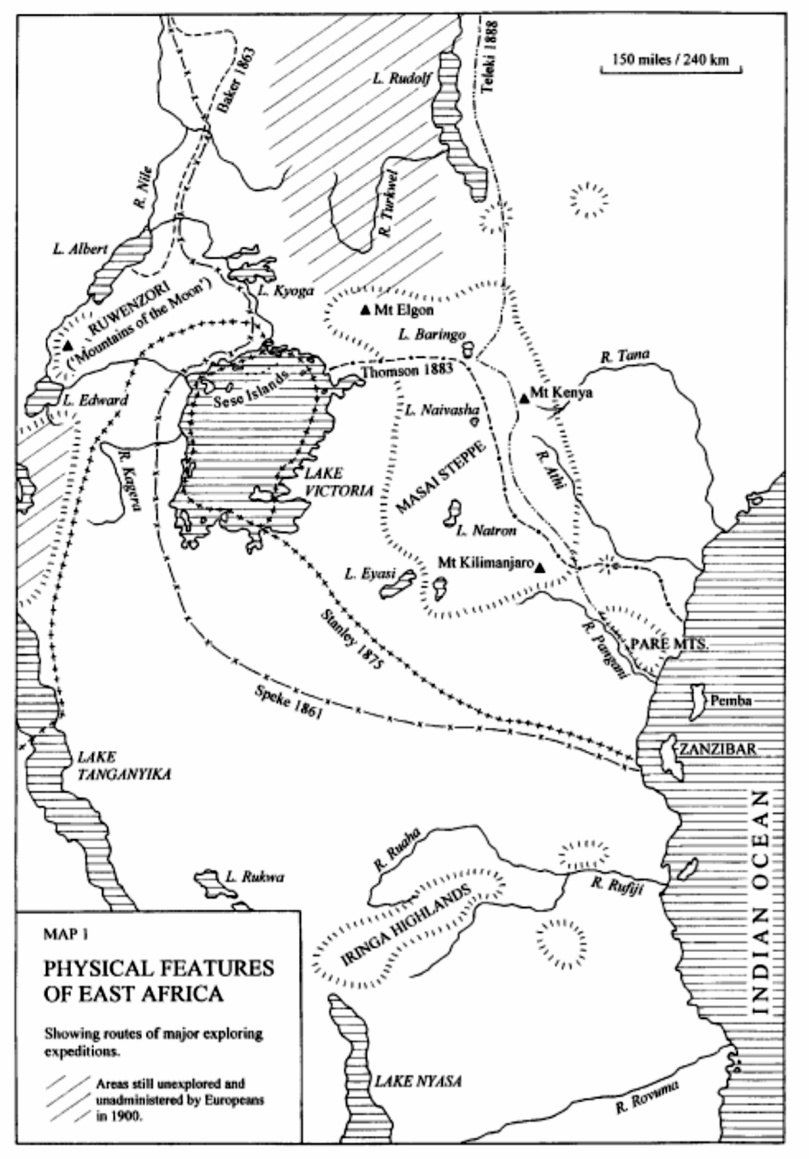 A sense of warrior masculinity was important in these societies that, given the tough life of guarding and raiding cattle, this produced skilled fighters. The elders maintained stability by holding back antagonistic young warriors from excessive raiding. During the early phase of their expansion, the pastoralist Masai enjoyed several military advantages over the pre-existing Sirikwa communities of the Great Rift Valley. The Masai employed large socketed spear blades that were deadlier than the lighter tanged ones used by locals. The fenced and partly dug-in enclosures of the Sirikwa protected their cattle from individual thieves but became traps when attacked by a large Masai raiding party, which would surround them and burn the defenders out.

The Masai protected their own cattle by keeping them highly mobile and posting sentries. Known as the “eagle’s wing,” Masai battle formation was simple, with the best warriors forming a core and others deployed on each flank and behind as a rearguard. Tactics were simple—a Masai force usually charged directly at its enemy. Neighboring people like the Kikuyu copied aspects of the Masai military system, including age sets and initiation.

Although the Masai lacked a formal military hierarchy, by the beginning of the 1800s, popular religious leaders could assemble large contingents of warriors from many sections. Centralizing prophets did not emerge among the Samburu, a similar group in what is now northern Kenya, because they had to move their herds around much more in the very dry environment, which meant they did not have large gatherings of warriors like the Masai.

During the late 1700s and early 1800s, Masai prophets began to exert a centralizing influence over warriors, directed large-scale military operations, and built up big personal herds from shares of captured cattle that attracted more followers. Consequently, the moderating influence of the elders declined, and Masai warriors became more aggressive.

In the early 1800s, a prophet (or laibon) called Supet directed warriors from several Masai sections in a southward expansion into present-day northern Tanzania. Around the 1810s, Supet’s alliance of pure pastoral Masai fought a long war, characterized by many skirmishes, against the Iloogolala, a section of the Maa-speaking (Maa is the Masai language) Iloikop who lived by both herding and farming and had a reputation as particularly bellicose raiders.

The Iloogolala were defeated, their communities either scattered or absorbed by Supet’s alliance, in what is remembered as the first significant war in Masai history. After a drought in the mid-nineteenth century that prompted many cattle raids, the pastoral Masai of a now elderly Supet fought another major war against the Ilosekelai, another Iloikop group on the west side of Lake Nakuru, in the early 1860s and defeated them within a year.

By the 1870s, a new laibon called Mbatiany, Supet’s son, had brought together a dozen Masai groups into the Purko-Kisongo confederation. The last of the Masai-Iloikop wars took place in the early 1870s east of Lake Nakuru. Around 1869, a cholera outbreak made the Masai vulnerable to increased raiding from the llaikipiak, an lloikop group that had recently acquired their own prophet war leader.

After the Purko Masai were initially defeated by the llaikipiak, Mbatiany called together warriors from all the Masai sections into a large army—which vowed to win or die naked—aimed at annihilating all the Iloikop communities in the highlands surrounding the Masai plains. The Ilaikipiak were defeated in a quick series of large decisive battles near Lake Nakuru that involved heavy loss of life. For about a year, the Masai conducted mop-up operations against pockets of Ilaikipiak on both the west and east sides of the Rift Valley grassland.

A century later, the Laimer, the senior age set at the time of this conflict, was still celebrated for its courage. Masai control of the grasslands often rested on their martial reputation, and the appearance of a war party was sometimes enough to discourage resistance. 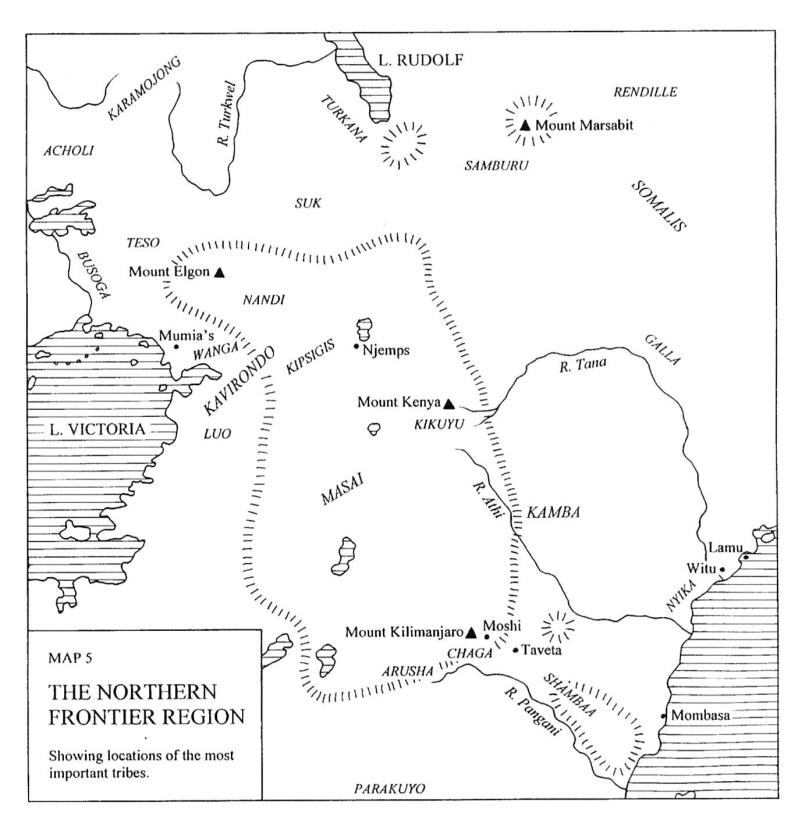 Masai raiding was successful in open country, but they had trouble overcoming enemies ensconced in rough terrain. Consequently, their attempts to expand further south into what is now central Tanzania were thwarted by the Gogo around 1830 and the Hehe around 1880. It has been suggested that warfare among East African pastorals in the first half of the nineteenth century was meant to secure resources for a growing population but that in the second half, it was about feeding starving people suffering from drought and a series of human and cattle diseases introduced by new links with the coast.

With the expansion of coastal trade from the 1840s, the Masai reputation for bellicosity and the arid nature of the country discouraged Arab and Swahili caravans from taking a direct route from Zanzibar to Lake Victoria. It is also likely that some Arab slave and ivory traders exaggerated the Masai threat to keep their competitors, as well as meddlesome European explorers, out of the area. 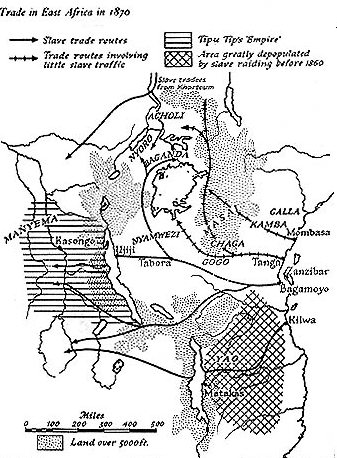 The Masai quickly developed a response to muzzle-loading firearms employed by coastal forces. They would take cover to avoid the first volley and then storm the enemy before they could reload. The Masai sometimes employed feigned retreats which encouraged the enemy to recklessly advance to seize cattle exposing them to a pre-arranged counter-attack. According to explorer Richard Burton, in an 1857 encounter, 800 Masai used this tactic to annihilate 148 Arab and Baluchi gunmen.

During the 1870s, Masai raids and cattle disease called lung sickness weakened societies south of the lake. Ten years later, around the time of Lokerio’s death in the 1880s, rinderpest (a more serious cattle disease) and smallpox devastated many East African pastoral societies. With that the power of the Masai declined. 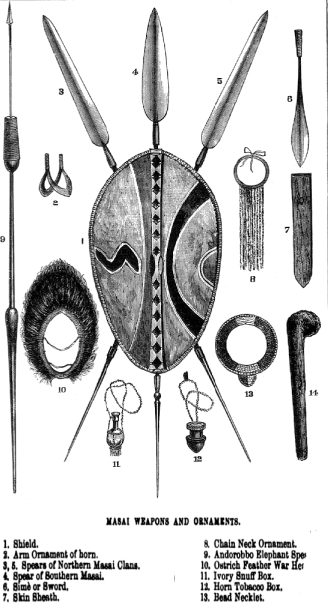 Who else did the Masai fight?

A quick glimpse at map 7 below shows their sphere of influence and the fault lines of conflict that made up their world. As a rule the Masai could basically be counted on to make war on any of their neighbours, particularly the Arab Slaver caravans who provided easy targets. Both Zanzibari and Baluchi forces felt the full force of many a Masai war party. The Masai went so far as to raid up to an including the Swahili coast with one of their most notable long range ‘raids’ being against Mombasa in 1856.

They engaged in actions against the Abyssinian Galla tribes in the north and off course against the German Karl Peters, who actively sort conflict with the Masai in his Emin Pasha Relief expedition in 1889. German operations continued against the much weakened Masai in 1891 following their harassing raids against trade caravans and the declaration of war on the Germans at Masinde.

German forces responded to these Masai provocations with attacks on camps east of  the Ruva River and conducted further expeditions to drive off the Masai around the North Pare Mountains near the Swahili coast, establishing garrison settlements to the east and west of the mountains. The subsequent German operations during the 1890s against the Arusha people involved allied elements of Masai fighting alongside the Arusha so they continued their struggle with the Germans in this way.

To the south they fought the expansionist Hehe people as much from the results of their own inter-tribal conflicts and raiding and also fought both with and against Ruga-Ruga forces during and around Mirambo’s time.Though seldom beaten in battle the Masai did nevertheless suffer setbacks against other Masai tribes and outside forces despite their fearsome reputation. However, ultimately it was pestilence that brought the Masai down. As mentioned above, during the later part of the 1880s rinderpest caused widespread famine and hunger with the killing off of vast numbers of cattle, the lifeblood of Masai society and power, which combined with an outbreak of smallpox that all but meant the end of Masai power as it had been only a decade before.

As a footnote, the Masai recovered to a degree from the deprivations of disease and fought one another in the 1892 Morijo War as well as functioning as British allies in the war against the Kikuya. The British themselves avoided a war with Masai in the incident of the Kedong Valley massacre which presents a number of interesting scenarios had that conflict not been avoided. Various other clashes involved the Masai up to 1900 providing many possible scenarios to consider for gaming. 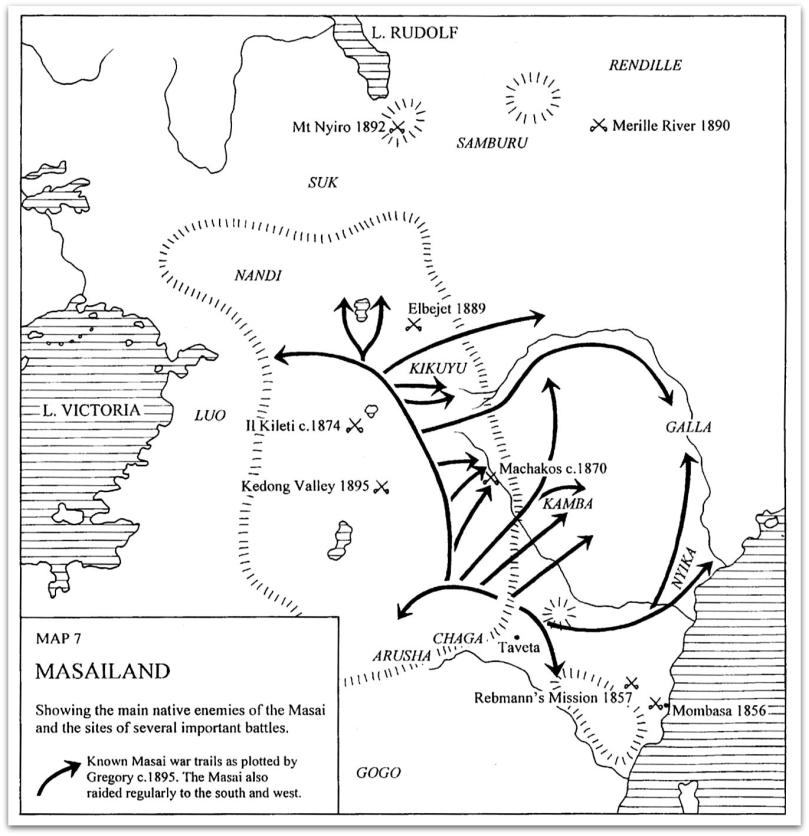 So, where else can we get some info on the Masai?

Every Darkest Africa gamer’s friend off course, Chris Peers, wrote an excellent piece that was/is freely available online, “Splendid Fellows – A Masai Army for Darkest Africa”, and naturally this is a go-to source of information, which many of you probably already know of.

If not go to the Wargames Foundry Library or grab it directly from here. Chris covers the Masai pretty comprehensively so there seems little use in repeating much of what he has so conveniently described for us. For a more solid treatment of the Masai and their allies and enemies you can’t go without his Wargames Foundry Book on East Africa, excellent value in both hard copy or in digital form…this really is a must have.

Contemporary sources exist from the explorers and expeditions that encountered the Masai as well. Stanley records his experience with the Masai, in volume one and volume two of his classic work ‘Through the Dark Continent’. Other sources are provided by Thomson, the infamous Karl Peters, Hinde, H.H. Johnston and French-Sheldon. All these freely available books will give you plenty of inspiration for your scenarios and force construction.

Next post we’ll have a look at figures, paints, gaming ideas and anything else Masai related we can think of.