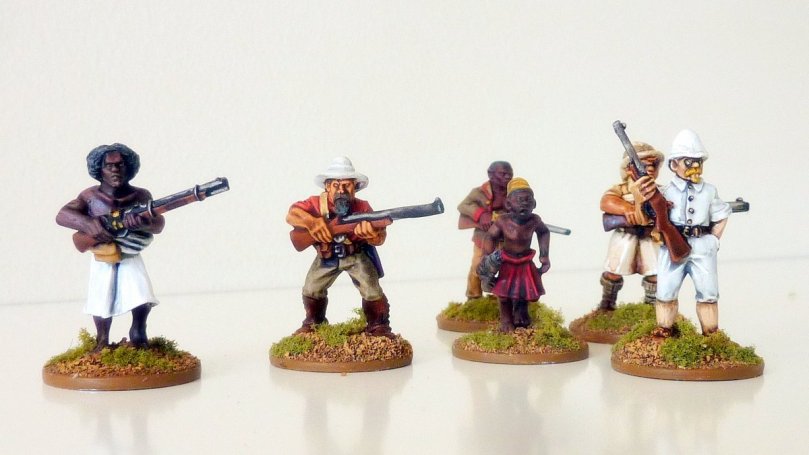 In the last post we took a look at the Askaris that form part of the expeditions that pushed into East Africa in the 1880s. To lead these expeditions off course we are going to need some ‘white explorers’. I’ve knocked a few up and they will be take the part of Dr Carl Peters or anyone else of his time. In Rifles & Spears the White Explorers are pretty ‘powerful’ characters.

Alot of the discussion in the previous posts regarding weapons types and uses also apply to White Explorers. It can be seen that the type are rated Provincial. This will mean that there will be a 2-action card and two 1-action cards in the draw deck. This will provide them with intermittent moments of being quite lethal on the 2-action card, whilst the 1-action cards will insure that they will always remain a threat.

The big difference between other troop types is that units of White Explorers are small! Very small! The number 1 – 3 shows the number of White Men that can be taken. For each White Man that can be taken a gun bearer can be as well. It’s these gun bearers that provide the White Men with the ability to effectively double their rate of fire so three White Men actually fire as six-man. Even though the ‘standard fit’ weapons are muskets more often than not a selection of breach loader, repeater, or elephant gun will be a more typical weapons fit for a white man unit. Such a compliment of weapons will provide the White Man units with considerable firepower.

Moving along you can see that movement is 4″ and the shooting, aggressiveness and defence ratings are 3+. These ratings mean that the White Man units are quite powerful in both attack and defence. As mentioned, the weapons fit is quite varied for white men units, and all the weapon types shown are available.

In the traits section you can see that they have the unusually named Muzungu trait. This is a special rule that only applies to White Man units. There are two rules that apply to the Muzungu trait:

The main benefit is of course that they never test reaction. Needless to say this is a fairly powerful trait and reflects the small unit, highly motivated ‘do or die’ mentality of these strong minded individuals. The second trait reflects the ‘powers’ these men seemed to have in the eyes of the unaccustomed Africans. Rounding out the traits for the White Men is the Scout ability which gives them the usual movement benefits as described in previous posts.

Lastly, a small note mentions that you can never have more than two White Men units in your force. Obviously there are not large numbers of these types of troops and this restriction takes that into account. Usually a single unit leading the way, supported by askaris and armed porters accompanied by a baggage train…your typical explorer force.

So that’s the small overview of White Men in Rifles & Spears and now onto a few pictures. 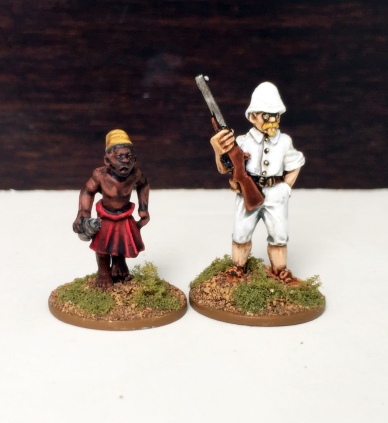 This chap is my Carl Peters figure 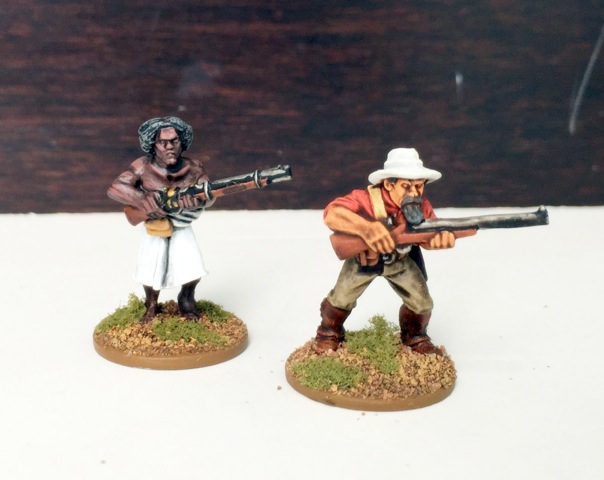 Copplestone Somali (helper) with his ‘master’ 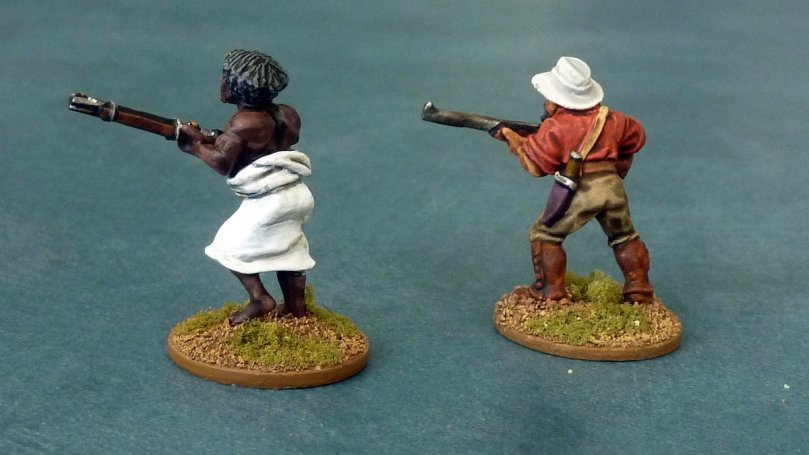 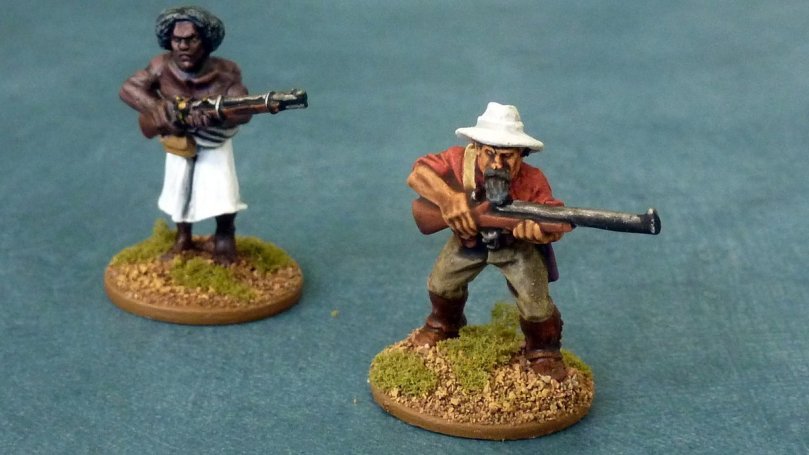 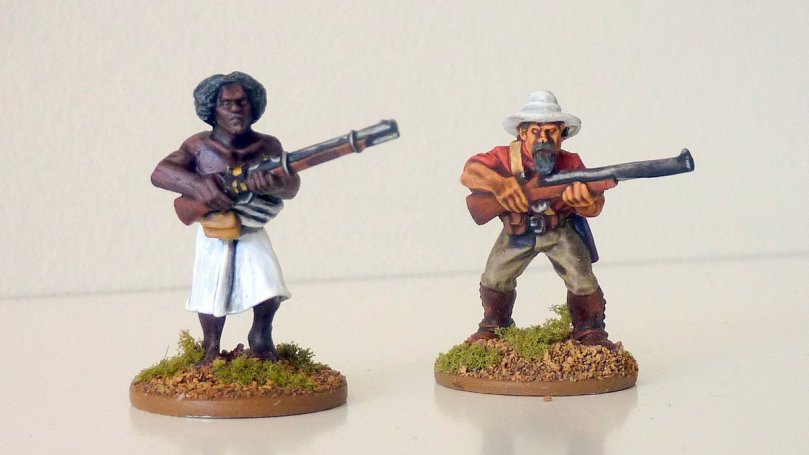 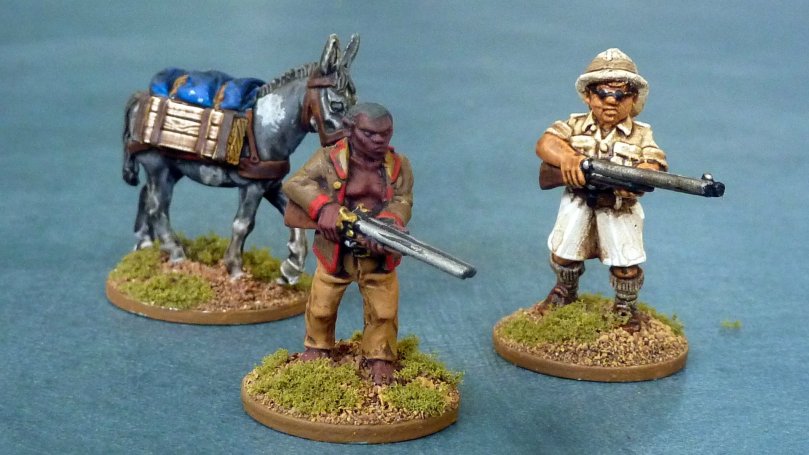 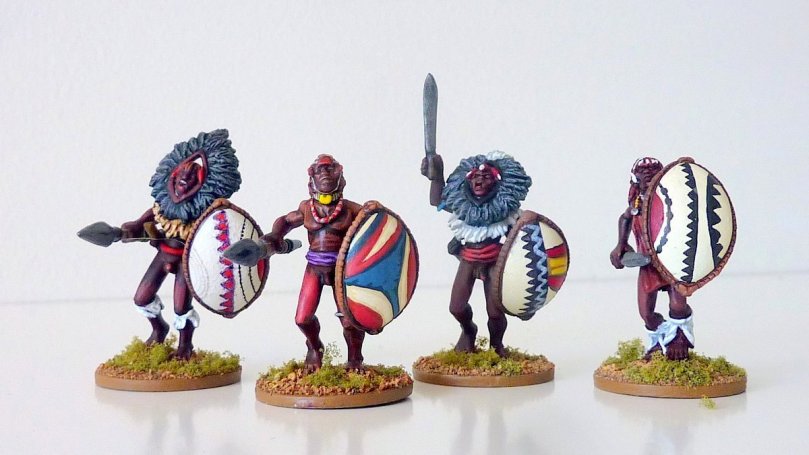 …a few of the opposition…