So much has been written about the men in red….what else is there to say. 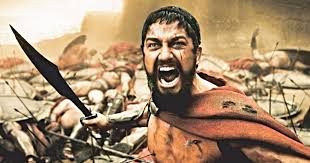 I’ve long had a fascination of the struggle between Athens and Sparta and hoplite warfare in general – from the time of the Persian invasions until the rise of Macedon. Phillip, Alexander and all that followed is a natural interest from there. Is there a better history than Thucydides’ Peloponnesian War?

For now though I am continuing a project started a while back and looking to get my Spartan force going. Looking at using the recently released Clash of Spears and Men of Bronze equally. In fact, whilst Men of Bronze in no way compares to the flashy ‘Clash’ its simplicity and flexible agnostic approach to force construction augurs well for use – simplicity and subtle game play combined with accessibility is a virtue! There’s a nice review here.

I prefer largish units so Men of Bronze may be the ticket. I also like the flexible rules mechanics that lend themselves to adaptation/tweaking which I’m always looking to do to get the effect I’m after if required. The author runs an excellent support blog and is looking at a follow on rules set as well – definitely worth checking out.

For now, I thought I’ll pop up a few pics of some recently finished figures…more men of Sparta to come…oh, I tweaked the Osprey MoB playsheet that might be of interest – two pages now and has unit attributes on it – here…just a little more compact than the ‘official’ playsheet but it does have a few of our house rules as follows that players can ignore if they choose.

Other than that the playsheet is as per the rules.

Note – the above amendments reflect our view of things and in no way say they should replace the rules as written – dealer’s choice.

Lastly, these bad-boys are lovely Foundry Steve Saleh sculpts, reshielded with Victrix shield and spear from their hoplite boxes – shield transfer is Little Big Man Studios transfers. They make for a most decidedly spartan look to my eye…

A few added pics from one of our Men of Bronze games. Units are not yet up to speed -we’ll be ‘going big’ for a more grand look.

Wargames Foundry Spartan cavalry – I’m probably going to put shields on the rest of these like the spartan shield carrier in the middle – using the left over spartan hoplite shields from Foundry as I have reshielded all mine with the Victrix ones.