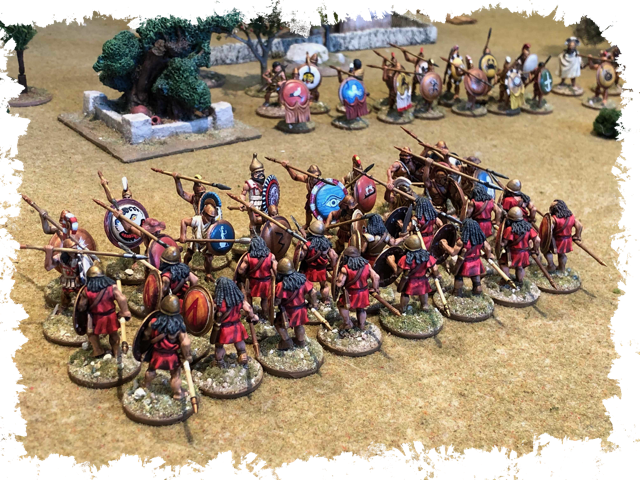 Expanding on forces that have been added to the growing armies we played an ‘upscaled’ Men of Bronze clash.

Thucydides tells us that “(Summer/428) – just as the corn was getting ripe, the Peloponnesians and their allies invaded Attica under the command of Archidamus son of Zeuxidamus, king of Sparta, and ravaged the land; the Athenian horse as usual attacking them wherever it was practicable and preventing the mass of the light troops from advancing from their camp and wasting the parts near the city. After staying the time for which they had taken provisions, the invaders retired and dispersed to their several cities.”

So set the scene for our encounter using Men of Bronze as our mass skirmish system. In our clash the local Athenian polis hoplites, supported by an Athenian city-state contingent, raced to the defence of a local sacred olive grove, so cherished by Greek peoples. 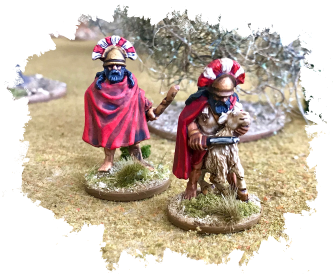 Forces used were 46 points, slightly larger than the typical 38 point game, playing Scenario 4 – Desecrate the Sacred. The objective of the attacker (Lakonians) was to spend 1d3 turns in contact with the sacred grove (hacking it to pieces) without having their force ‘collapse’ (rout) from the field…a seemingly not to difficult task. The olive grove was centrally placed with the forces arrayed opposite one another with the Athenians allowed one unit to forward-deploy near the objective.

An added twist to this battle had the rolled for ‘complication’ (special rule) of Bad Water. This meant each unit had to roll 4+ to activate each turn due to their upset stomachs from the (not so good) water drunk from a local well.

Our units are oversized (upscaled) as we prefer a bit more ‘heft’ in our game. Hoplite units are 16 figures, Peltasts 12 figures, Light Infantry 8 figures and Cavalry 6 figures. We use a house rule that allows support for units with 1″ (1BW) of friends to provide the support (and not from the leader) combat bonus – this accounts for the larger units we use and is in the spirit of the original rule. 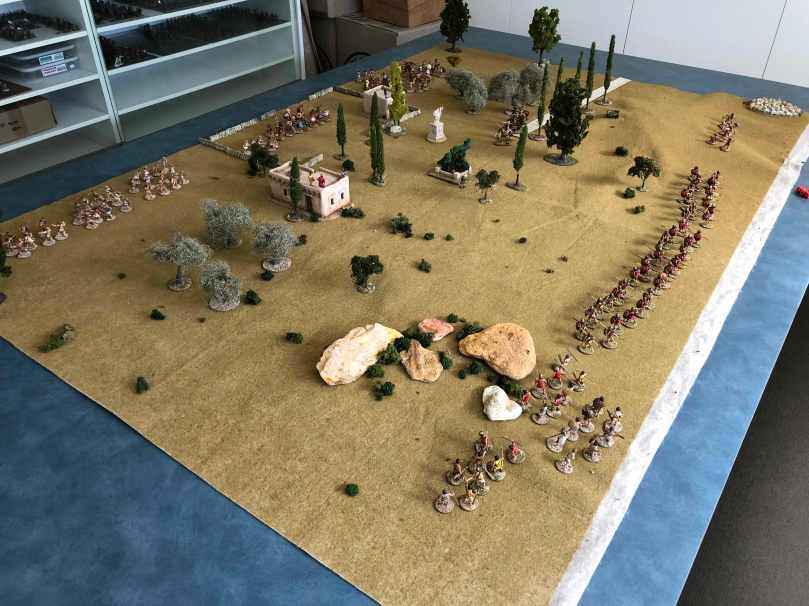 Lakonians to the right, Athenians to the left, with a unit of Athenian cavalry forward deployed. Terrain had two ‘working’ olive groves with two hills to the left and right of the Lakonian position, which had little effect on play. 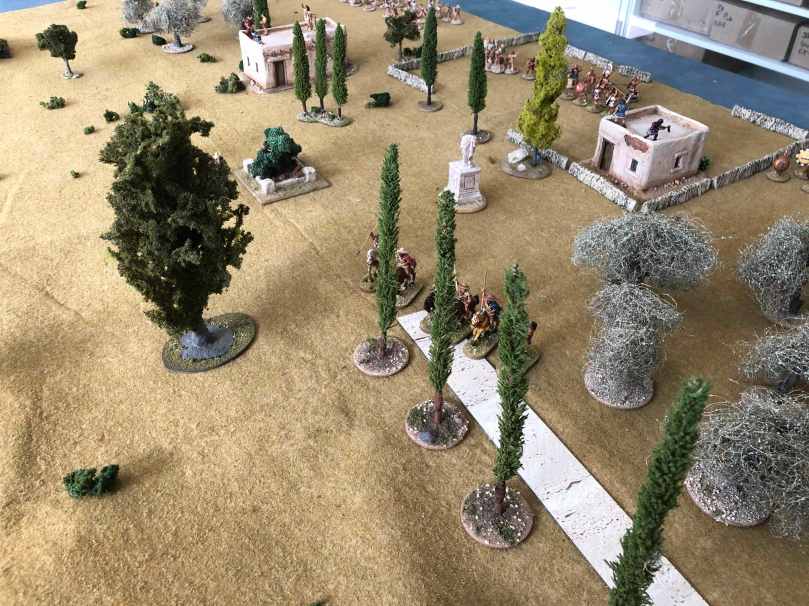 Athenian horse poised to cover the road leading to the olive grove. 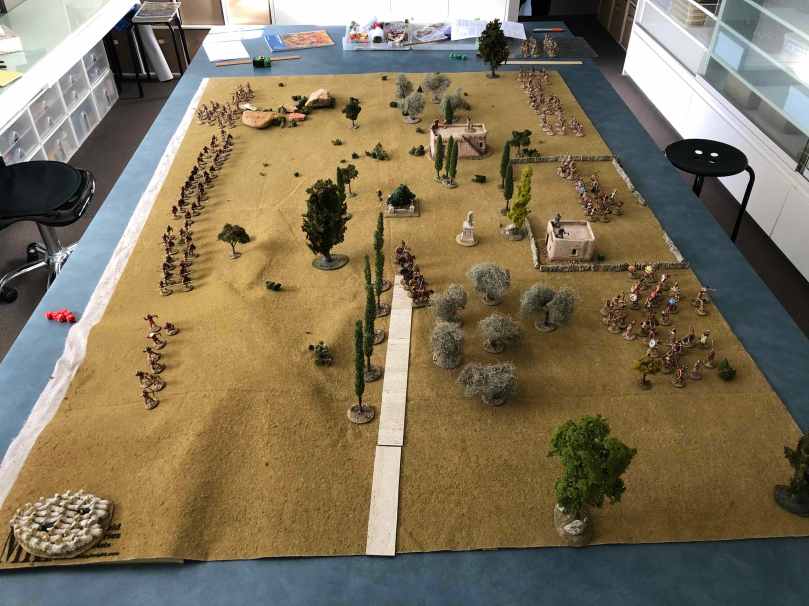 Long view of the table. High hill in lower left corner, grove in the middle. Athenian hoplites in open order, Lakonians marching on in close order, skirmishers to the flanks. 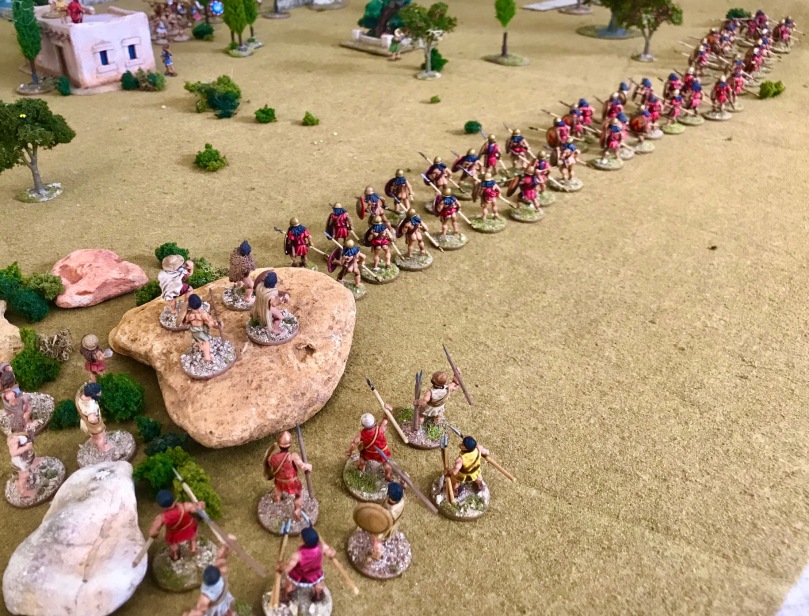 The Lakonian line presses forward all units passing their ‘bad water’ check but needing to use some Arete cost to do so. …this should be easy… 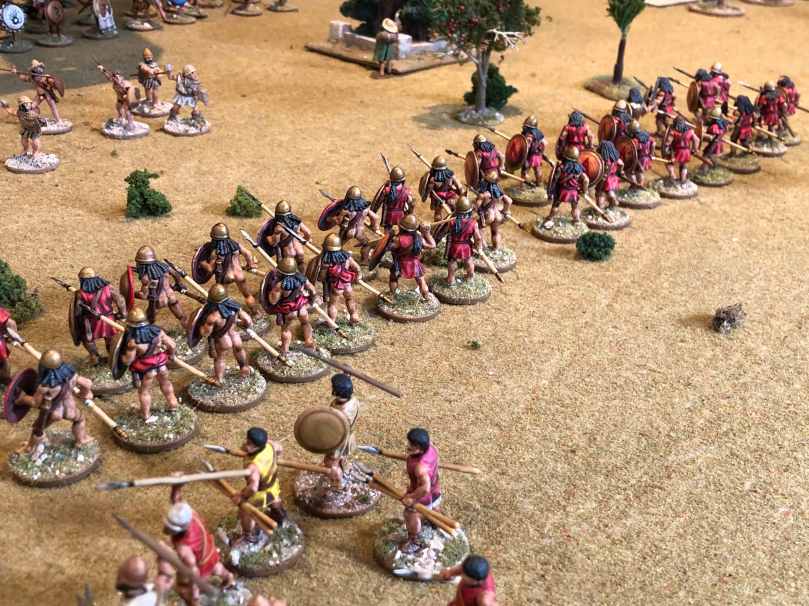 Athenians (top of pic) pressing forward with light troops unleashing some rocks and javelins at the Lakonian foot.

We have a few house rules for MoB. One is that Lakonian foot have, at a +1pt cost, an Ekdromoi rule aka light hoplite runners to drive off enemy skirmishers. This enables hoplites to add +1 armour enabling them to move quickly and still have quite effective armour from enemy light troops. 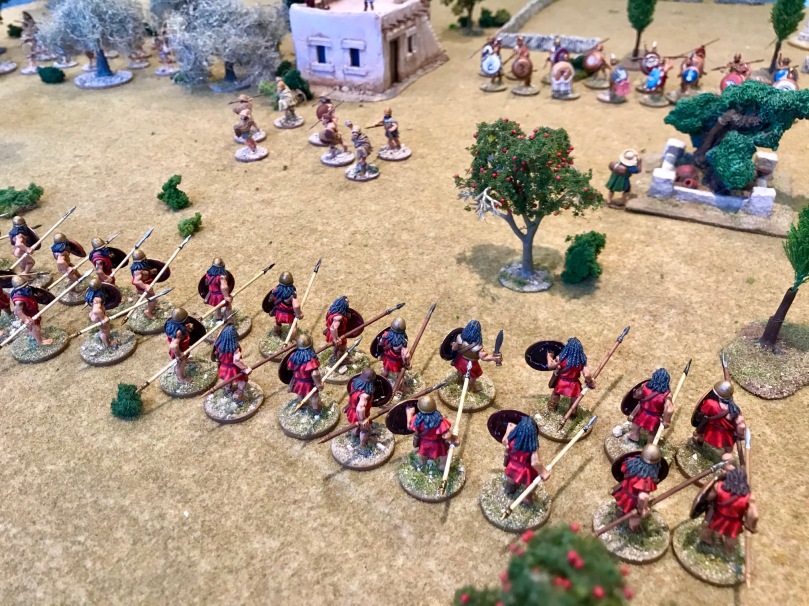 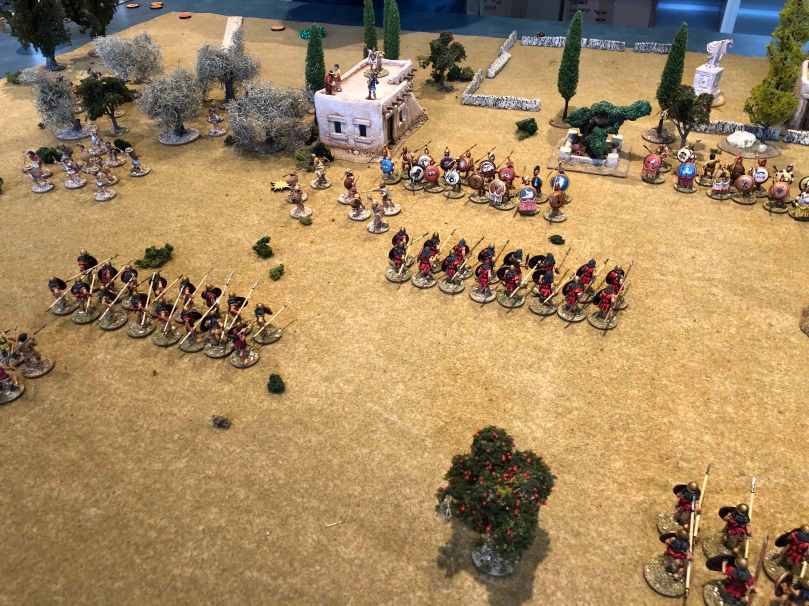 The Athenians with many more light troops are able to seize the initiative ‘at will’.

Through the olive grove Athenian light troops emerge and a general skirmish develops between them and the left flank Lakonian Psiloi (light troops).

Athenians advance quickly and press ahead with the Lakonians failing to activate and thereby being beaten in the olive grove dash. The right flank unit has held back as the Athenian horse circled around to engage the (out of picture) helot archers which were easily cut down.

Athenian cav surge up the hill and run down the helot archers..they didn’t put up much of a fight. 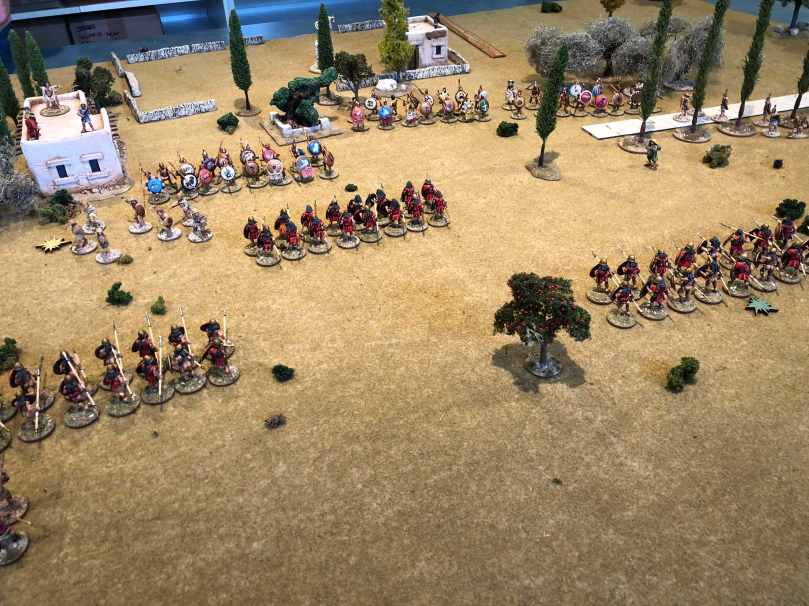 …the right flank Lakonian hoplites take 1 hit from cavalry javelin fire (out of picture, post overrunning helot archers) …some lucky/effective shooting! The centre unit, with Strategos, push on to drive away the isolated Athenian hoplite unit. The nearby Athenian light infantry unit (with two hits – the yellow star) warily holds its ground.

Athenians start to get their act together…their left flank hoplites form close order to brace for the Lakonian hoplite phalanx. Unbeknownst to the Lakonians these hoplites were little more than rabble city militia hoplites…but at this point their true identity was not known… 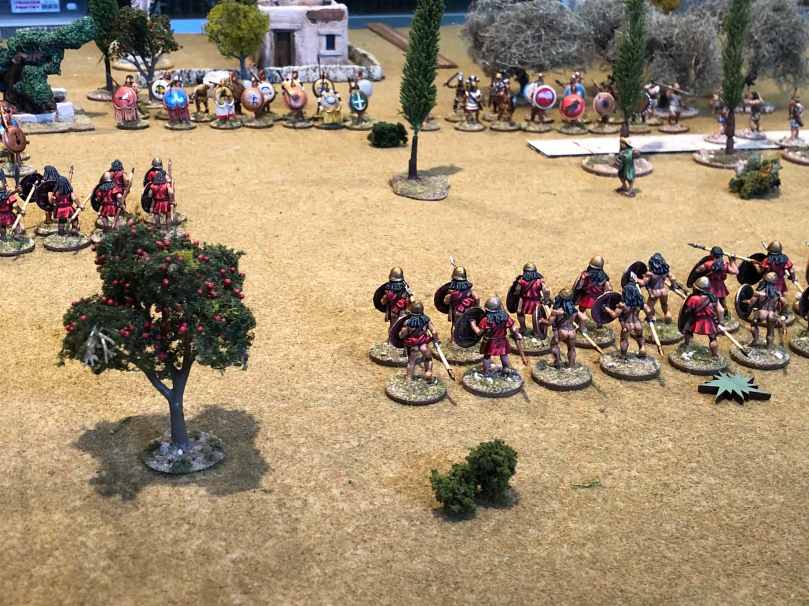 …calm before the clash… 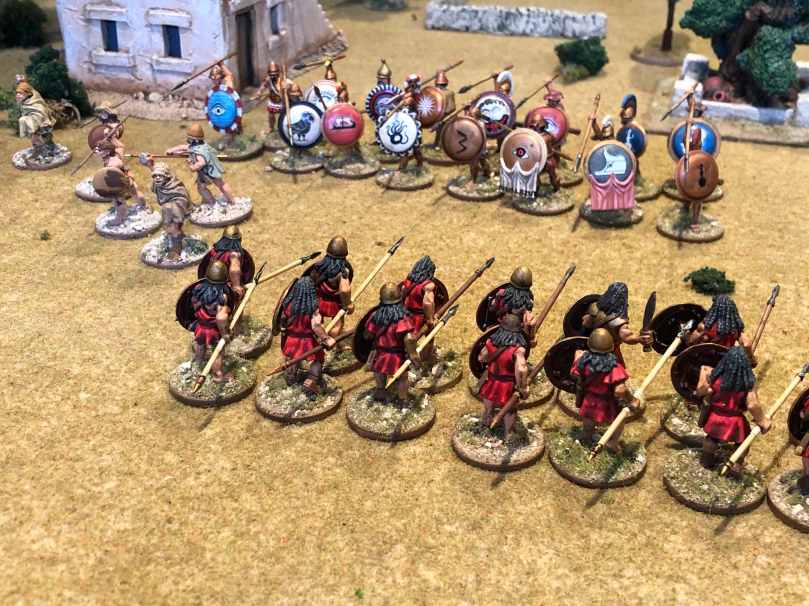 …spears lowered, the Lakonians brace themselves as the Athenians seize the initiative and launch an attack… 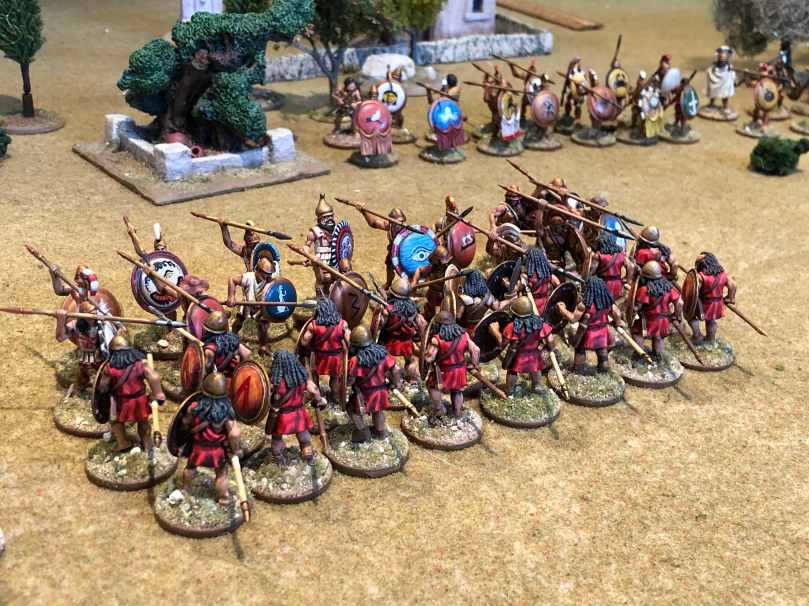 …Crash!!…the Athenian phalanx drives into the Lakonians, both sides in close order, thrusting and shoving as the two sides enter the othismos (the shove)… 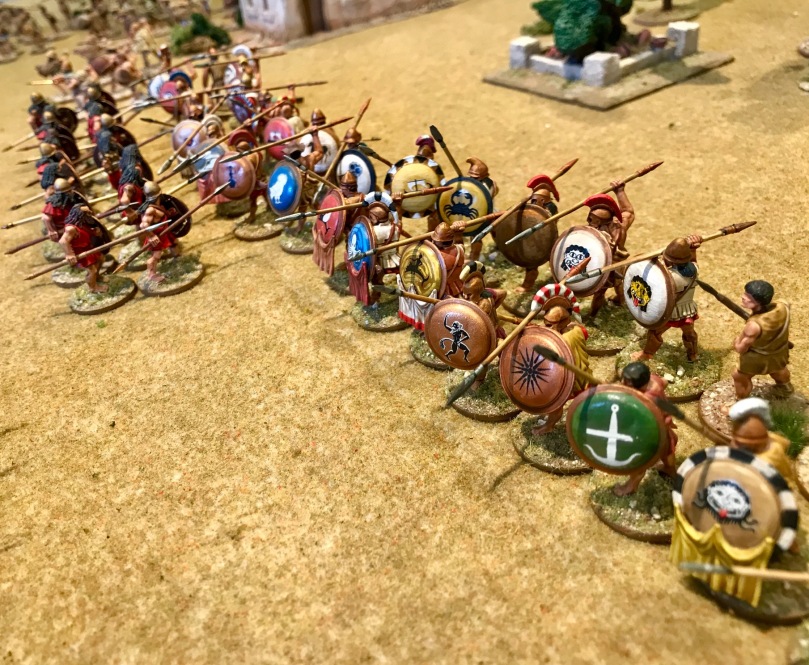 Militia hoplites support the Athenians on their right… 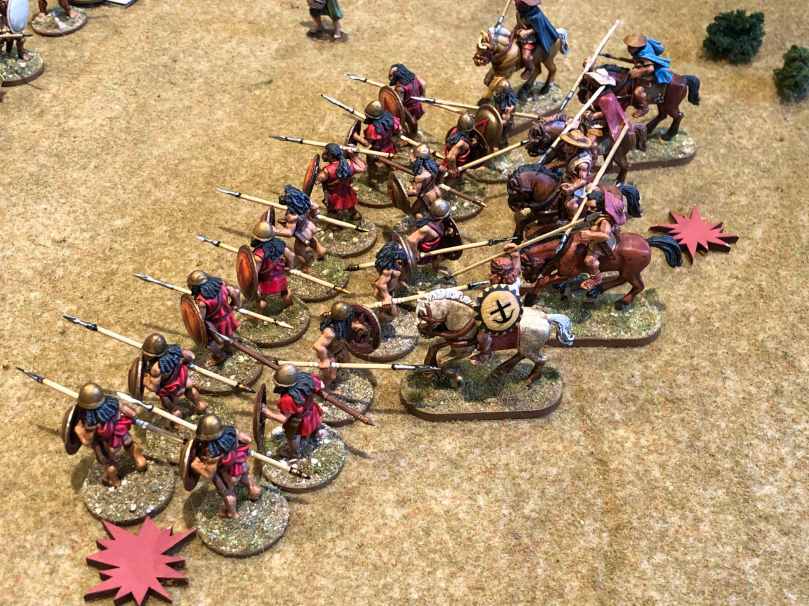 …meanwhile, the Athenian left flank horse, having softened up the Lakonian hoplites, launch an assault in rear of the hoplites – not to be deterred the heavy foot turn and face and fight as best they can to fend off the horsemen. The contest is a close one with horse falling on spear tips and men on foot falling to the cleaving of mounted swords… 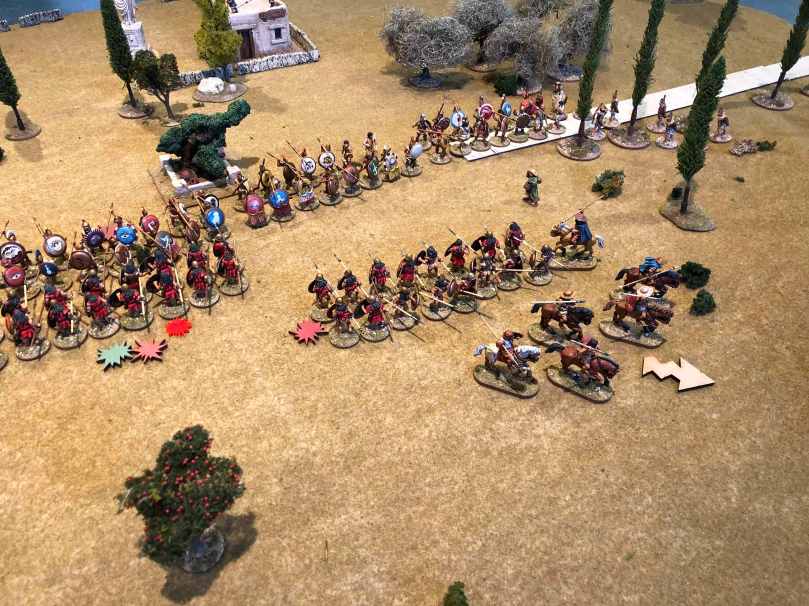 …The centre phalanx clash continues with the Lakonian foot taking 4 (of their 5) hits, teetering on break point. The Athenian hoplites equally hover but one courage point away from being broken…the contest is a close one…the militia hoplites provide valuable support to their pressed Athenian brothers. Out of picture to the Lakonian left a single Athenian light infantry unit also pelts them with rocks, adding in yet more support against the isolated Lakonian phalanx.

…to their right however, the Athenian cavalry cannot break the determined Lakonian hoplites who drive of the horsemen and force them to rout… 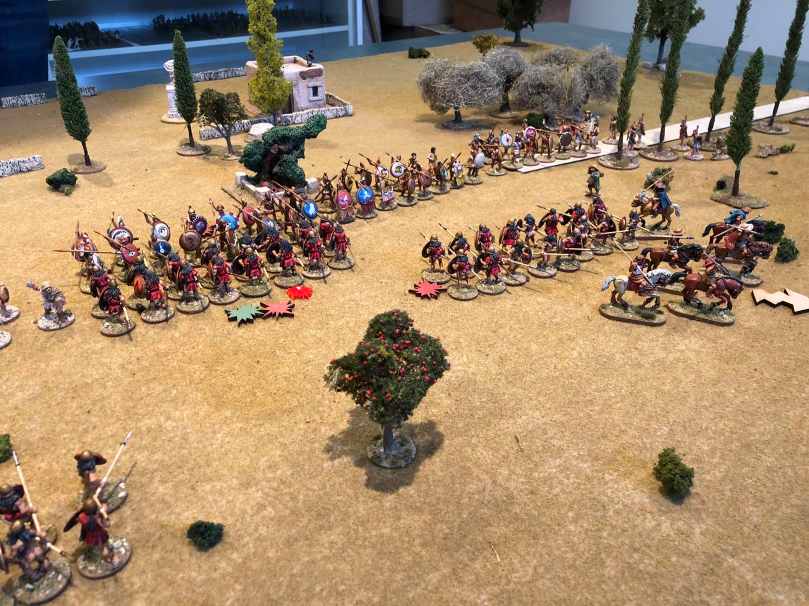 …their job done, the Lakonian right flank phalanx turns its attention to the two hoplite units to their front… 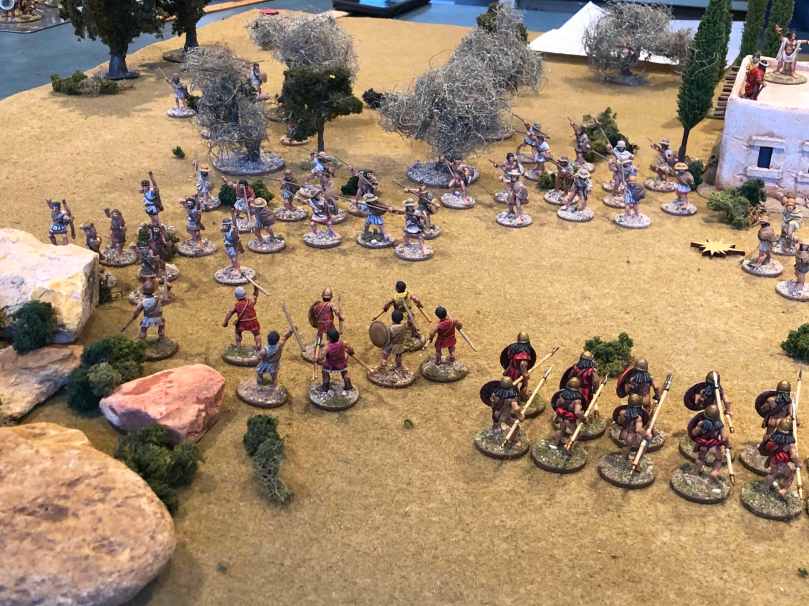 ..on the Lakonian left the clash of minnows causes the loss of most Helot light infantry but not before driving off some Athenian psiloi as well… 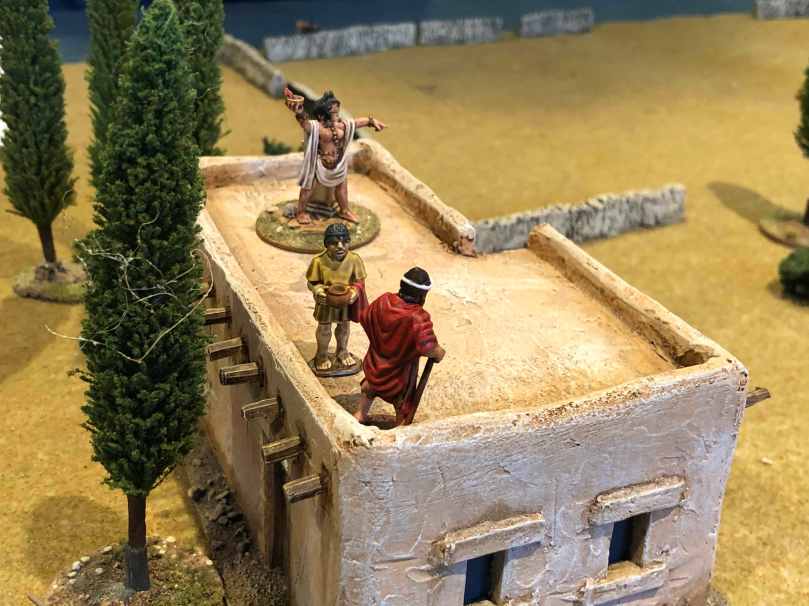 …”some grapes while you watch the battle my lord”…”thank you, lad…” 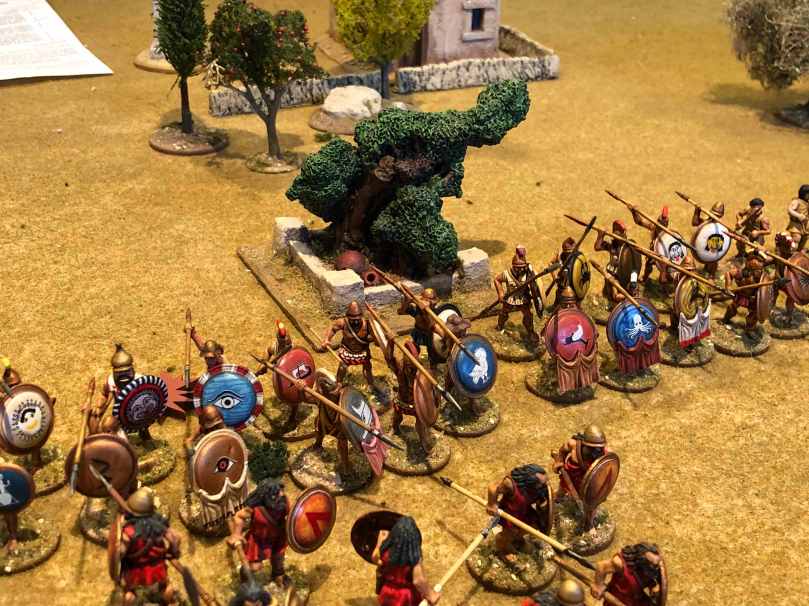 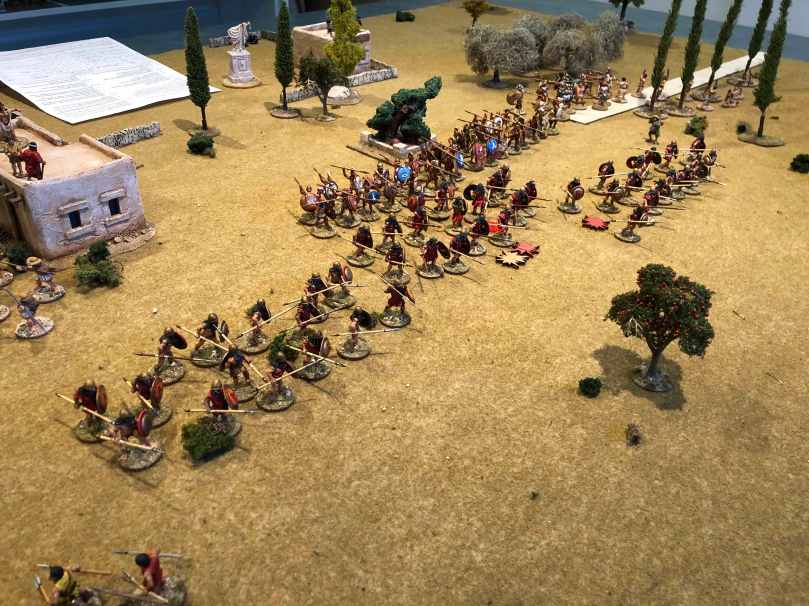 ..in the blink of an eye the line breaks…the right flank Lakonian phalanx unable to intercede in time.

…the centre Lakonian phalanx gives way, with the Strategos running with the shattered unit. This triggers an immediate 25%+ and strategos loss ‘collapse (morale) test’…requiring the roll of 5+ per unit to remain in the field or rout.

Sadly, today, the men in red ran back (ahem…’withdrew’)… to their base camp having been driven off from their impromptu raid and the Athenian olive grove is saved from defilement by the Peloponnesian interlopers… 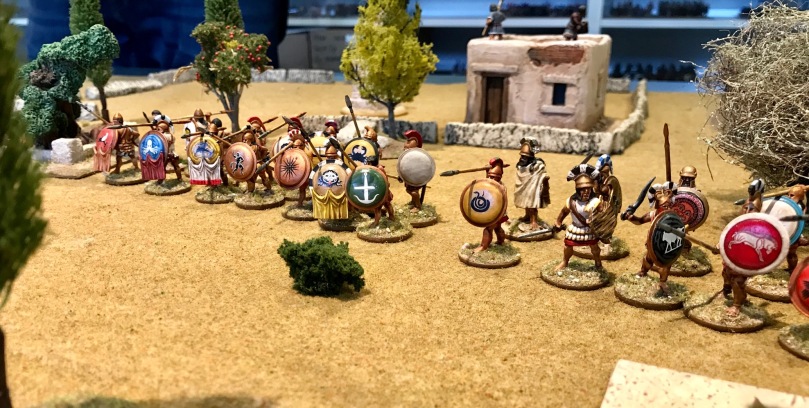 A slightly bigger and quick playing game 3 hours end-to-end. The larger units really provide a good deal of ‘presence’ on table and give the game a slightly bigger battle feel to it all.

In this scenario the bad water 4+ activation requirement became a real impediment as it critically stopped a number of advances, both Athenian and Lakonian. These added wrinkles work well to mix up each scenario.

The much larger skirmish based force gave the Athenians alot more Arete to play with giving them a move advantage they made good use of. As mentioned in a previous post, we used the Arete assigned to hoplite units and all other units, with a 3:1 exchange ratio converting one to other. This worked well.

The Athenian player upped his force size by taking some hoplite units as low grade ataktes (militia) hoplites. This provided him with some more points to expand his light forces…cunning! Lucky for him, the Lakonians ran before these second rate troops were engaged…they did provide valuable support however, so their job was done for the day!

FYI – I made a playsheet to use for the game which can be downloaded here.

All in all, good stuff. We like Men of bronze and will be including it in our stable of rules to use for Ancient Greece – recommended.