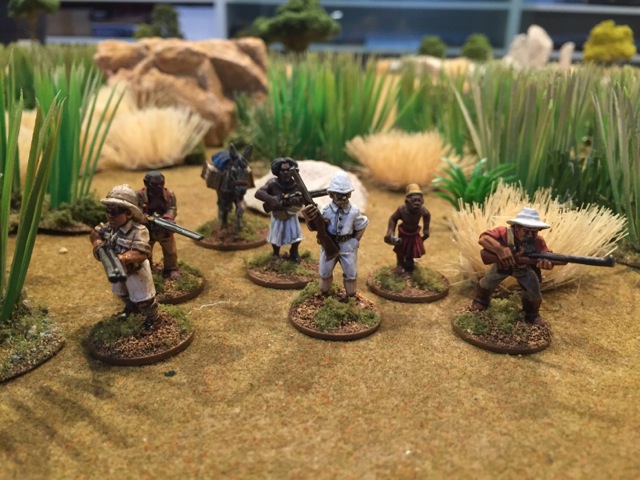 The Explorer list has a few more unit rosters in it as you would expect. These are composed of units that are more typical of the types of firearm equipped troops the game is pitched at. A typical Expeditionary force is generally made up of a small group of Explorers, this being represented with 3 ‘white men’ accompanied by their gun bearers….a unit of six figures. They would often be supported by a ‘well trained’ Askari force and/or armed porters or perhaps lesser Askaris.  These troops would be armed with muskets or breechloaders, even repeating weapons in some forces.

In our ‘typical’ expeditionary force we see the following troops. This list reflects a ‘basic force’ which could be supplemented with heavier equipment such a light cannon or Maxim Machine Gun, a weapon for which we shall have to create some specific rules for. The machine gun or cannon could easily be ignored and more askaris used to bolster a ‘guns only’ force if a player chooses. 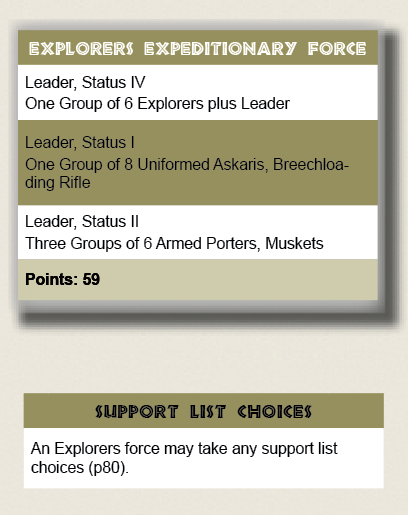 The explorers list represents a kind of colonial paramilitary force with unusual rules being needed to account for the particulars of the white men that lead these expeditions who had a ‘kind of’ super human aura around them. Whilst this doesn’t apply to similar types or people that know better of who such men are, to the unacquainted African native these individuals seemed to possess black-magic type qualities in combat. The term Muzungu (a Swahili word for white men to describe strange or unusual types of things, in this case, people) is used to describe these white explorers.

Therefore, the additional rules that we need to account for cover Muzungu, Machine Guns, Baggage porters and, what must be some of the most entertaining Rocket rules yet devised…kudos to whoever came up with those!

Ok, let’s look at the unique rules required for our Explorer list.

Muzungu: This term describes small heavily armed, highly motivated ‘white men’ or ‘explorer’ types. They ignore all effects of Shock. They do not require a Reload Action when firing, being ably assisted by their gun bearers as they are ie No Reload when shooting if armed with muskets. If equipped with breechloading or repeating weapons then they can double their usual rate of fire due the constantly loaded weapon at hand. This applies to each white man as long as he has a supporting gun bearer to assist him shooting.

We touched on the reasons behind these types of characters in Sharp Practice above. For the army we are looking at, Muzungu would apply to the small party of leaders of a White Explorer expedition, in our case, Carl Peters and Lt. von Tiedemann with their accompanying small entourage.

Maxim Machine Gun: These weapons are treated as follows in Sharp Practice – Darkest Africa. Deploy as Line Infantry, Move as Foot Artillery, cross obstacles as Militia. Treat as a Medium artillery piece when firing (p.43) requiring one less action to reload. May fire a sustained burst with no reload required in the same manner as artillery canister fire, but restricted to the ‘3 per game’ ammo limit rule (p.49).

Using the existing rules it will be sufficient to make our Maxim machine gun essentially the same as an artillery piece. However we will allow it to be more mobile and to fire at a faster rate. The use of the ammunition rule is to allow for restrictions of ammo use but still allow a player to go,’full auto’ should he wish to. For the Maxim this doesn’t result in any jamming issues but for earlier machine guns a rule to account for this would be appropriate. A slightly reduced range would also be in order.

Regards mobility, some Maxims were man handled, carried on mules or even mounted on small ‘gun carriages’ much like earlier machine guns like the Gatling or Nordenfeldt. In this case I would treat it the same as a Light Artillery piece for movement purposes as well as for fire purposes also.

A simple jamming rule for machine guns would be to say that when a (non Maxim) machine gun fires it jams if it rolls three 1s (ie roll 10 dice and three 1s = a jam). If a weapon is jammed it requires the crew to complete a simple task number of 9 to remedy the problem (p65).

As an additional wrinkle for early machine guns, I would allow a player to roll as many dice as he chooses when shooting up to the limit of the weapon ie 10 fire dice. In this way he can mitigate the possibility of getting a jam when a small controlled burst will do the job. The maxim does not need to concern itself with such things as it fires without fear of a jam. This can also show the benefit the Maxim had with its advanced design….reliability.

Rockets: Heavy rockets may be taken. They are treated as Light Artillery crew for game purposes.

The rules as written will work perfectly well (p44) and certainly add a fun element to the game. One could argue that Rockets had a greater effect on tribal forces and that is not unreasoned to some degree. If players choose to reflect such whizzbangery then roll 2D6 for the effect of shock, just as cavalry do.

Baggage: Expeditions require supplies – none more so than those trekking in Africa. Therefore, each expedition must have two accompanying Baggage Groups (6 men each), assumed to be accompanied by a small number of guards to protect it. For game purposes, each is treated as a Train Defense Guard (p82) i.e. musket armed militia with a Status I leader. The loss of a Baggage Group causes a Bad Things Happen test as for a Loss of Support Group. For off-table baggage, when a Chapter Ends, both players immediately roll a d6 each. If the non-baggage player’s score is greater than his opponent by a score of two then news arrives that the off table baggage has been overrun. Immediately roll on the Bad Things Happen table three times using the loss of support line….good luck!

Baggage is probably the least ‘sexiest’ part of an Explorer force, but the most important. Fundamental to  any successful expedition is the protection of those that carry the supplies that such long range expeditions require. The Explorers know this as do their enemies.

Baggage is handled in two ways to my mind and reflected as so. It is either on-table with the possibility it could be lost or ‘safely’ off-table and not directly involved in play. Both cases need to be accounted for in armies that are burdened with Baggage. The on-table case is accounted for by their vulnerability to loss with an attendant loss of force morale….fairly straightforward.

If a player wishes to leave his baggage contingent off table he may do so but at a potentially higher cost to his on table force morale if the baggage is overrun and news reaches the on-table forces. This is reflected by the Chapter End which for our Explorer force can bring bad news of the ‘thought to be safe’ baggage actually being found by an enemy outflanking/raiding party.

This results in a particularly nasty potential loss in morale and could, perhaps, make the force break and run from the field, regardless of their commander’s wishes. Three d6 could cause a modest morale loss of 3 force morale points (ie there are unsubstantiated rumours but enough to shake the troops resolve) to a possible loss of 6 morale points (a survivor confirms that the baggage is being attacked and the force teeters on the brink of running)…so you can guard it on table allocating precious forces to do so or leave it off table at your peril and take your chances…the choice is yours! 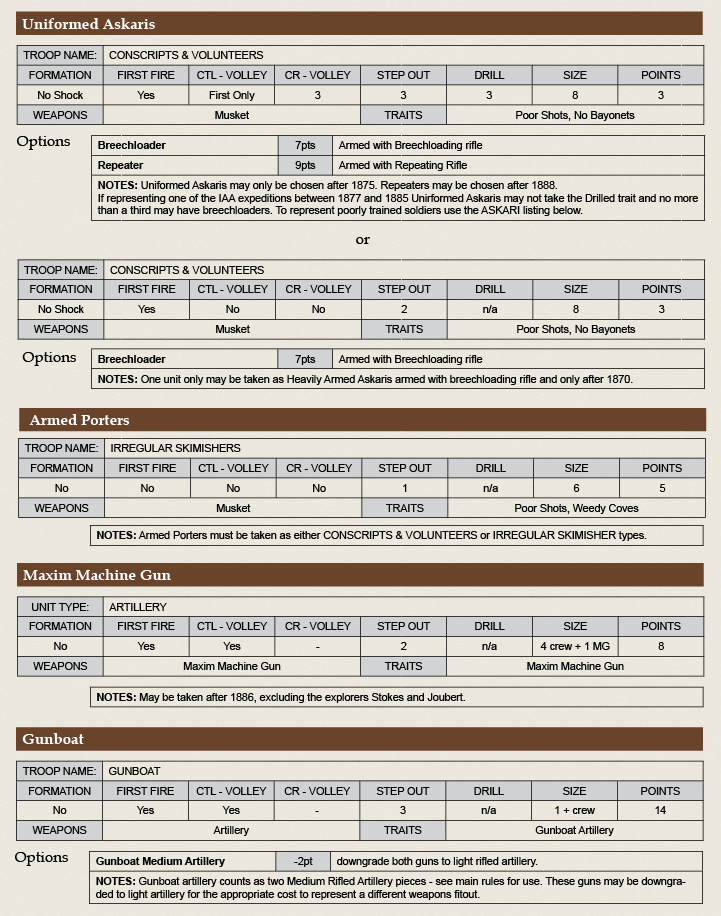 Unlike the Masai, Explorers tend to use the Command Flags for the usual purposes in Sharp Practice. A glance at the unit rosters shows what the attributes are for each type as well as the unit characteristics shown. These are standard as per Sharp Practice so there is no need to elaborate on them here.

It can be seen that for the most part the abilities of the Askaris and Armed Porters are not that great. They aren’t able to perform many of the usual drill movements of regular trained troops such as controlled volleys or crashing volleys and when they can try such things it usually comes at a cost of ‘3 flags’…generally not a good sign you can rely on them too much in a tight situation.

What they generally do have access to however is good weaponry. An askari with a breechloading rifle, well led, is still a formidable adversary. The ‘trick’ will be getting them in the right place at the right time vs an enemy that obliges by attacking them head on. Picking good ground and forcing your enemy into a tight spot where he is obliged to attack you is the key. Threatening his moveable deployment points is another good way to do so so as to cut off his tactical options and make him attack.

..I hope this short series of posts gives some idea of how Sharp a Practice can be used for Darkest Africa..use ’em, lose ’em, choose ’em….take whatever works above and have a go 😉