THE COMBAT OF ST. ULRICH

For those unfamiliar with the ‘Combat at St.Ulrich, it pitches a defending force tasked with guarding a river crossing by seeing off an assaulting force. The capture of the bridge is worth one Army Break Point, of which both sides only have two. The river Schwartz is only crossable at the bridge. So the game is a brisk, sharp encounter with the attacker either being rebuffed or the defender put to flight.

Armies are deployed – the opening wide shot shows the terrain and initial deployment in the Combat at St. Ulrich. The French have deployed two battalions of IR Piémont in front of the bridge of the western side of the river with two squadrons of ‘French service’ Nassau-Sarrebruck German cavalry to the flank. The artillery is deployed not on the Zeitberg (hill), but to the east of St. Ulrich town.

This small detachment is commanded by the Prince de Robecq, a court favourite but a general of little note – his command attribute being Dithering. This small force, whilst solid, is poorly led and restricted in its own tactical and doctrinal manoeuvres against a more aggressive opponent.

A closer look at the French deployment. The infantry battalions guard the river crossing, but are deployed a little further to the west (left of picture) than expected. The medium artillery battery deployment has a clear field of fire in front of it. The German horsemen are deployed forward and to the right of the infantry…something is afoot with this deployment. 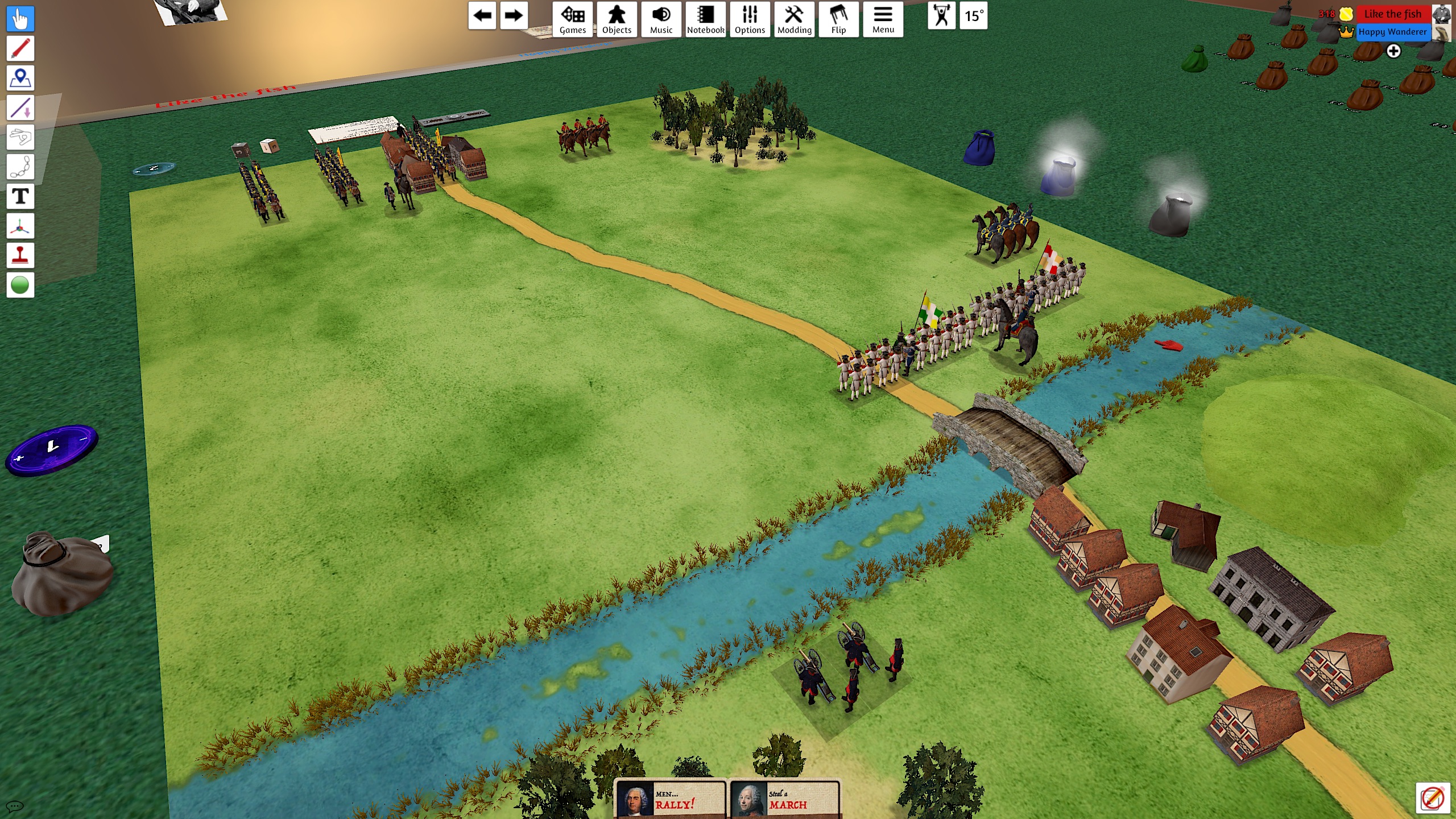 A clearer view from the French position. It is apparent that the French commander has kept his left flank open and weighted his force to the right, anchored on the all important river crossing. His intention, (as later disclosed), was to pivot his force on the river crossing and force the Anglo-German (Allied) forces to confront them facing east-west, forcing them into an enfilade position to the artillery battery, unassailable across the river. A clever plan showing some ingenuity to defeat the Allied forces and drive them off through a combination of infantry musketry combined with a deadly artillery crossfire.

The Allied contingent that confronted the defenders were formed into an Avantgarde of the army, in much the same force concentration as in 1758. Led by the otherwise lacklustre Gen.Mj. von Gilsa, on this day he would be inspired and was rated Dashing (yes the Allied commander rolled a 6 for his quality!).

His force consisted of two Hessian battalions, IR Mansbach and IR Prinz Anhalt with a third, the Brunswick IR Zastrow, rounding out his infantry brigade. A medium battery made up of six pounders provided artillery support whilst the addition of two squadrons of English Inniskilling Dragoons added some sting to his flying column.

[All troops rated standard except IR Zastrow (Inferior) and the Inniskilling Dragoons (Superior)].

Note also that the Allied commander, due to his Dashing rating, was not in need of the otherwise useful “Men…Rally!” card, as a Dashing commander can rally two hits of already…no problem, that card shall be saved for the next battle!

A rear shot showing the Allied army. The Brunswickers were deployed on the right of the column of march. The two Hessian battalions were tasked with moving through the town of Mulheim and taking the fight directly to the French defenders.

As the attacker the Allied army would move first.

In the opening movement phase, right on cue, Gisa rolls a command performance of Inspiring (6) and the Allied army quickly moves up and shakes out into line (with its double move). As if shaken by the speed with which the allied forces advanced, de Robecq failed in his command roll (poor) and his infantry forces remained motionless. This command failure completely snafu’d the french plan of trying to catch the allies in a crossfire. 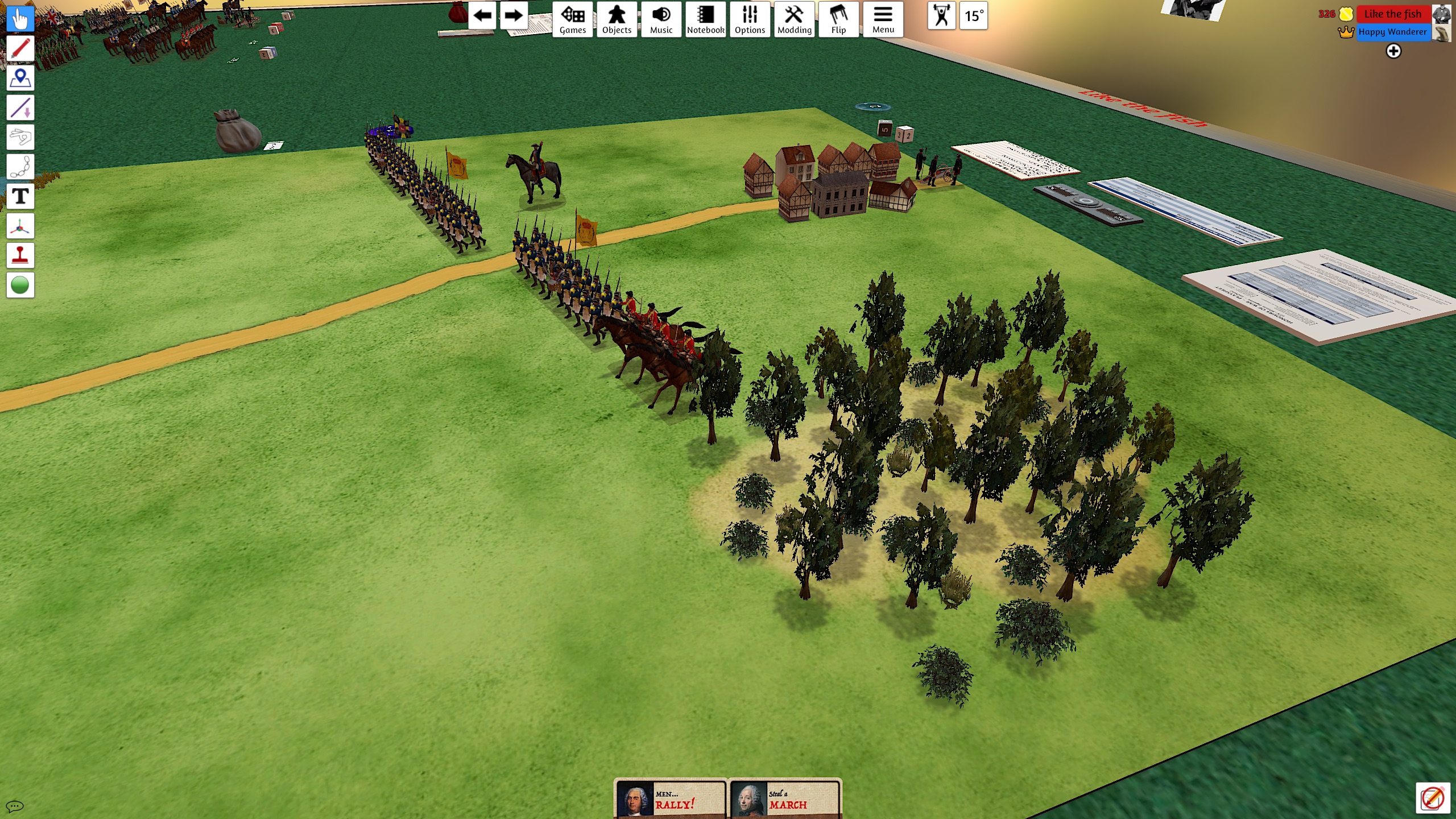 Moving up in support the Inniskillings cover the left flank of the allied brigade. The artillery, confused, fail to move (poor) and remain on the outskirts of Mulheim awaiting clearer orders.

Frustrated by the infantry commander’s inability to enact his plan, de Robecq ordered the advance of his Nassau cavalry to push forward and contest the ground upon which he wished to manoeuvre his infantry. 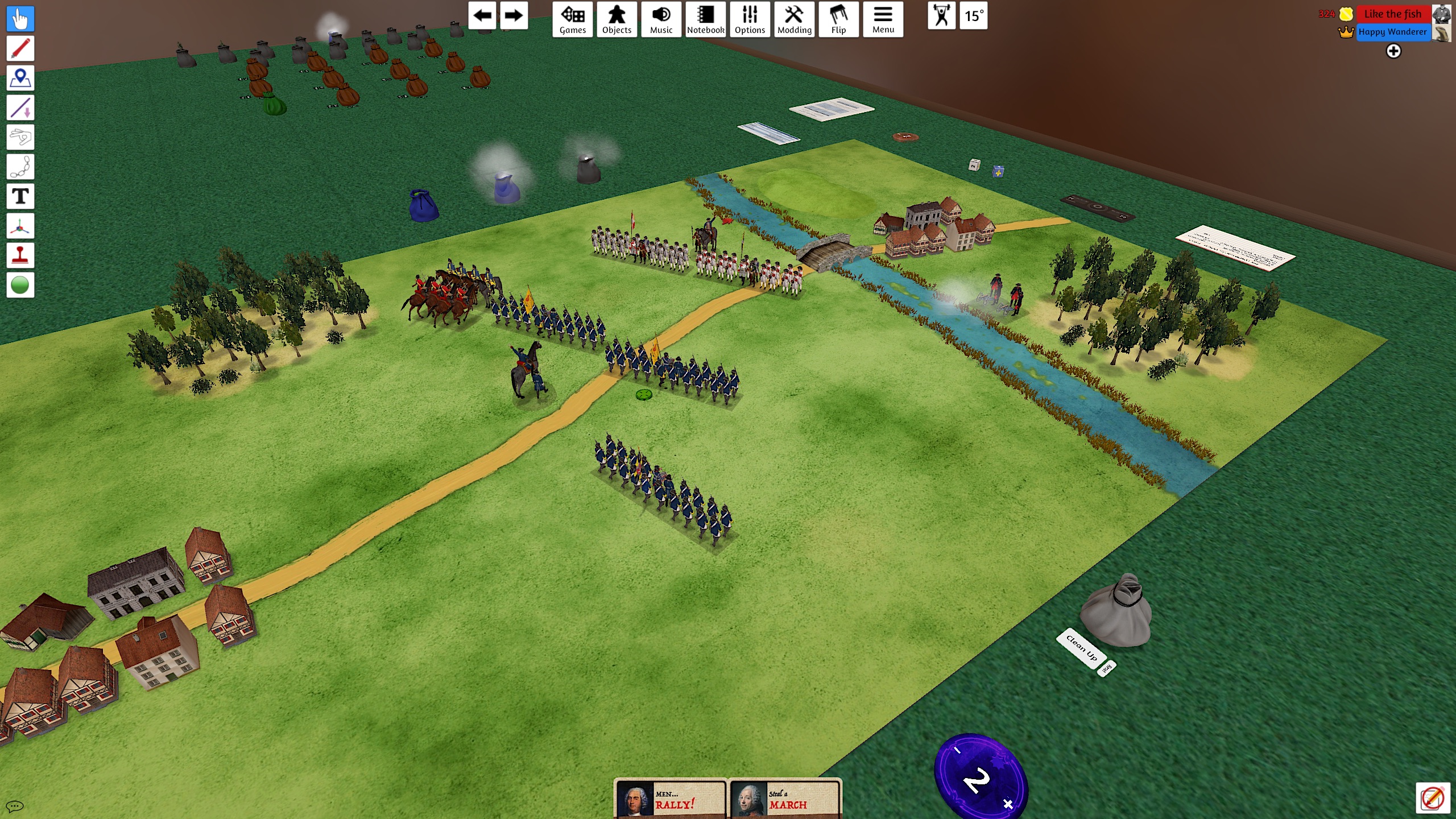 …equal to the challenge, the Inniskillings commander, Colonel Lord Cardogan, ordered his horsemen to put spur to horse and countercharge the Nassauers. At the same time Gilsa, hand waving, ordered his Hessian foot straight into the teeth of the French infantry, aiming to trap them against the river and defeat them with superior firepower.

Not to be distracted, Gilsa was alive to the danger the French artillery posed to the (inferior) Brunswickers, so ordering the Zastrow regiment to move to the left, aiming to tuck them in behind the Hessians and provide support.

As the lines close the cavalry engagement is still underway and both sides are preparing to move into musketry range. 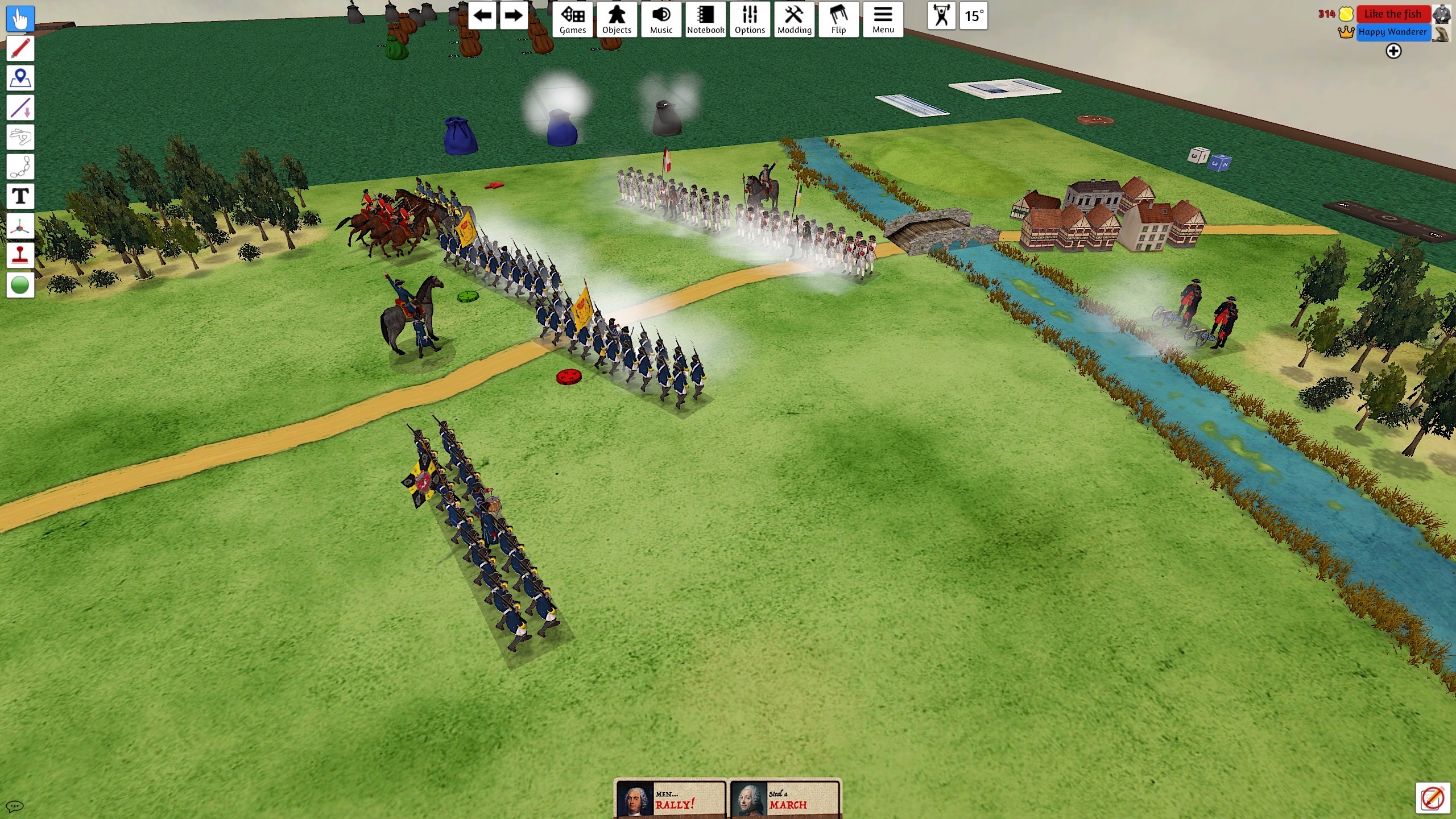 …with a brisk fusillade, the engagement is underway – the French infantry get away their fire first inflicting some losses on the Manbach battalion whilst IR Von Anhalt take much heavy losses from both a crisp opening infantry volley and some deadly accurate artillery fire (4 hits!).

…whilst the infantry exchanged volleys, the clash of sabres continued unabated. After two rounds of combat the quality of the English horse prevailed, putting the Nassauer squadrons to flight, now with the Inniskillings in pursuit, their blood up… 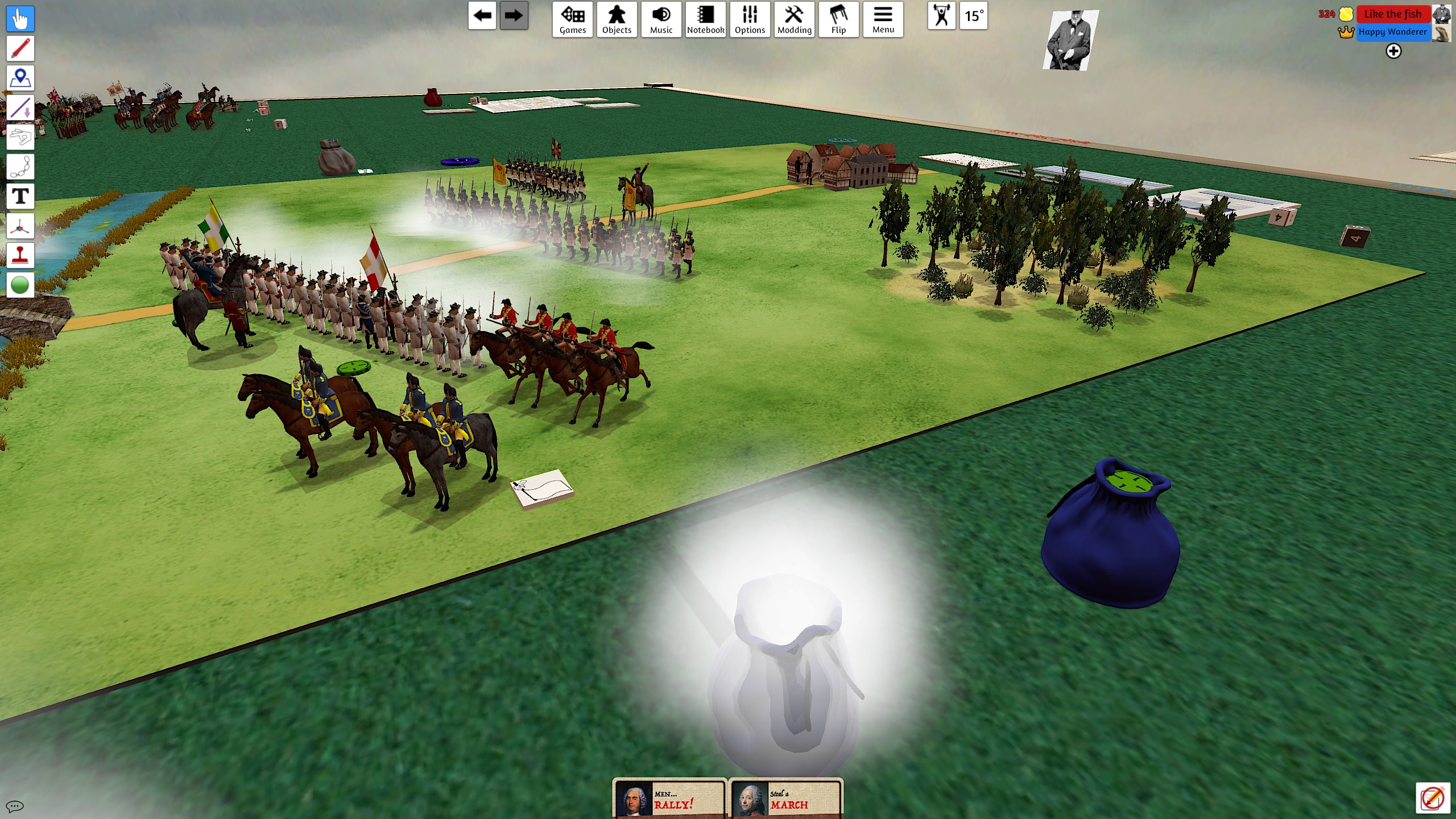 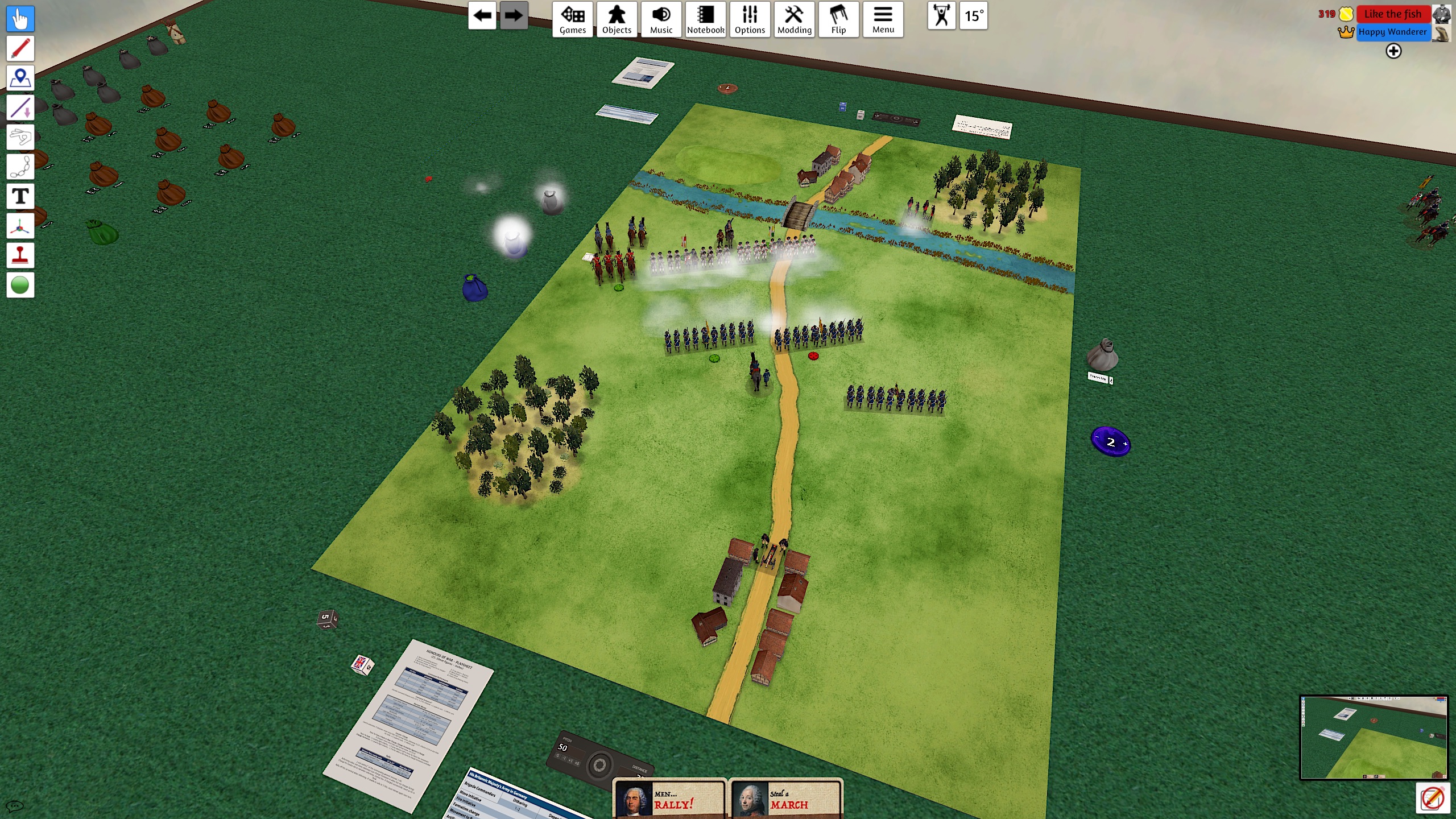 Overview showing the effectiveness of the French artillery firing position and general dispositions.

With the French cavalry now dispatched the right flank of the French brigade is left wide open. All infantry battalions have now taken hits and continue to exchange musketry with one another.

Meanwhile the Inniskilling horse swings around and takes the other Piémont battalion in flank. The early loss of cavalry protection places the foot regiment in a sticky situation…things are looking desperate for the French position.

IR Von Anhalt, whilst making a good fist of it, was compelled to retreat (4 hits for a retreat) and falls back toward Mulheim. Stepping into its place is IR Zastrow. Whilst of a lesser quality, the Allied commander is counting on his rallying ability (two hits in a turn instead of one) to ensure the battalions can stand in the line and continue the fight.The Allied artillery, finally, is starting to make a move up the road and emerges on the northern outskirts of the village.

Gilsa also orders forward battalion Mansbach right into the teeth of the fight against the French right flank. This will allow it to support the fight with the Inniskillings making IR Piémont’s position all but impossible to hold.

The view from behind the French left flank. You can see the Inniskillings combining with the Manbach battalion to drive into the lone French battalion. 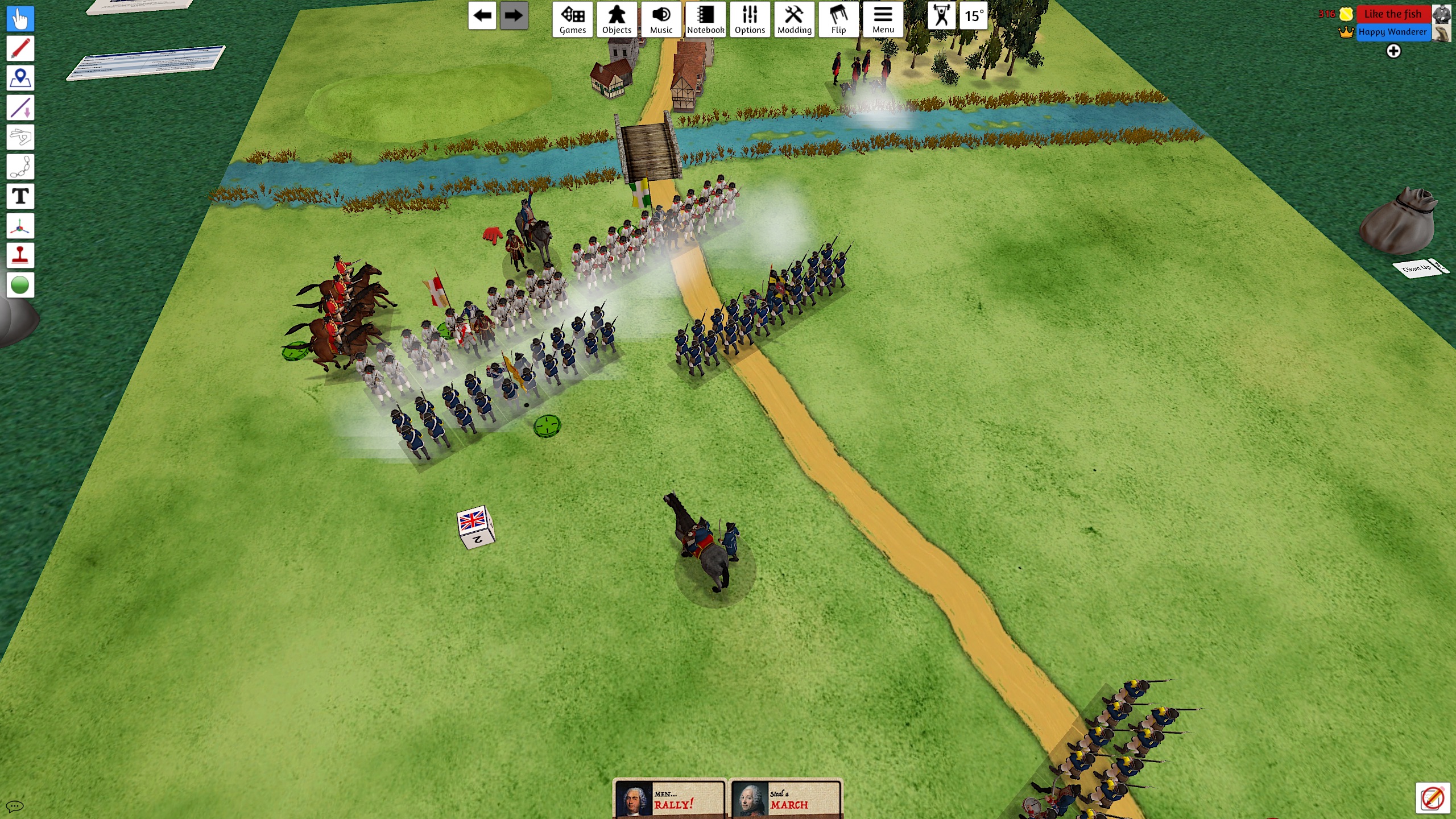 …whilst the combat rages, French and Brunswick foot exchange volleys…

…selling their lives dearly, the brave Frenchmen of regiment Piémont go down swinging (they roll a 5 on a DAv!) in combat. Whilst inflicting casualties sufficient to slow down the Inniskillings and Manbach soldiers (they are both on 3 hits) they cannot stand the fury of a flank attack and break and run for the bridge…

[At this point the French have lost two units aka 2 Army Break Points, which is what the Allied  player requires for victory. However this ABP check is not conducted until the end of the turn after all other combats have played out]. 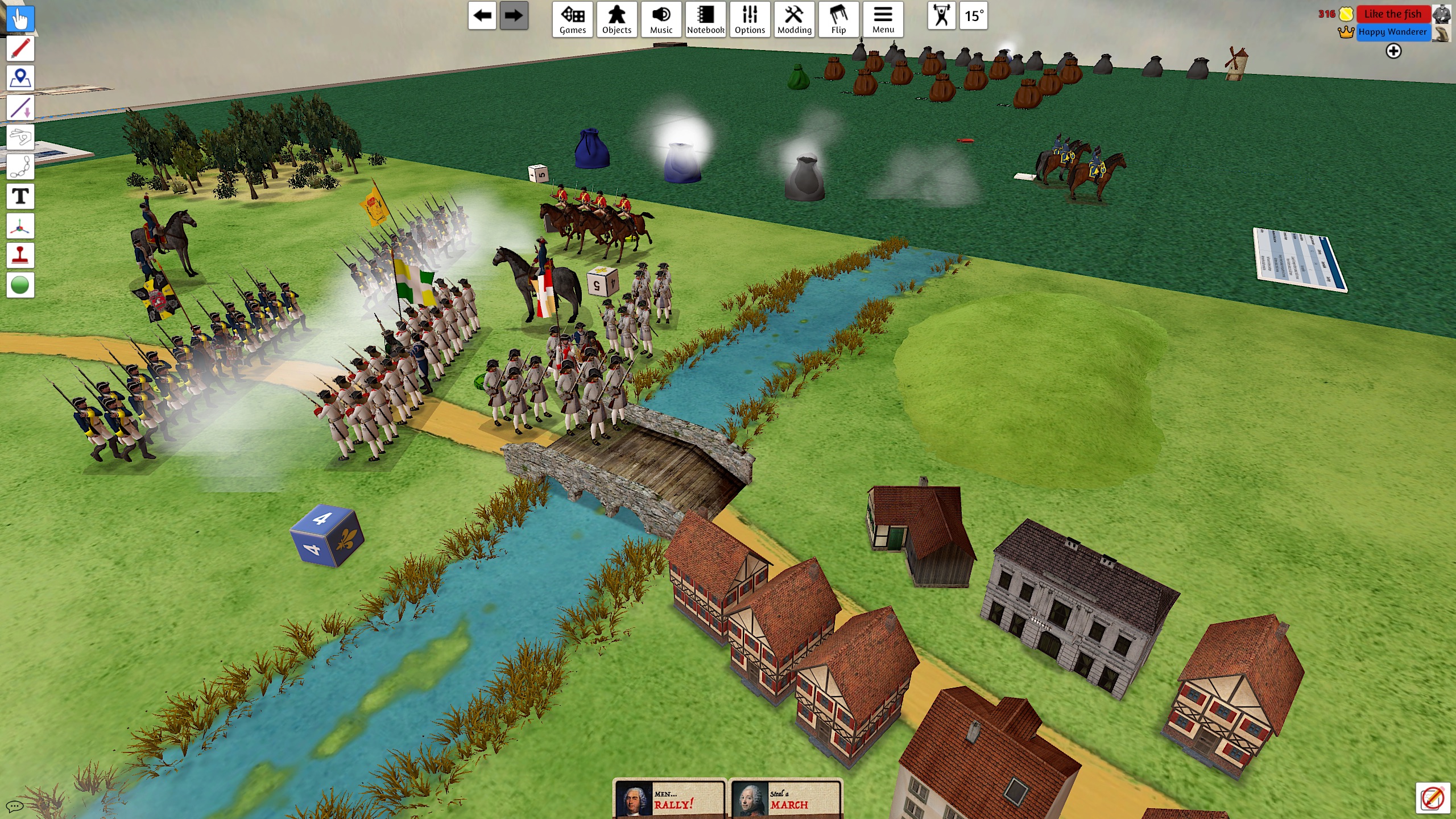 …having seen of the 1st battalion Piémont, the Inniskillings are poised for a breakthrough pursuit on the other battalion.

…and so in they go. Taking the Piémont in flank and resolving combat once again…

Once more, the French men fight hard but they cannot sustain a cavalry charge attack from superior horsemen on their flank. They take four hits and are compelled to retire…

…and so the turn ends, three turns in total and the French are forced to flee conceding the town of St Ulrich and the loss in the battle.

A most excellent encounter by any measure, This small scenario really does deliver some interesting tactical twists due to the unique movement and firing initiative system in Honours of War. The uncertainty of who acts first and how effectively commanders act from turn to turn combined with a non simultaneous fire sequence produces believable and exciting combat interactions. In this game, no plan really does survive contact with the enemy!

In this engagement the French player really was up against it. His Dithering commander offered him no benefits. Fortunately even after his initial plan was thwarted his role in a predominately static position enabled him to rely on his ‘poor bloody infantry’.

The ability of the (Dashing) Allied commander to gain a double move right from the start changed the complexion of the battle completely and utterly scuppered the French player’s plan for a ‘crossfire’ engagement to occur…as inventive as that plan was.

…a highly entertaining one and half hours of playtime we now move to the post battle campaign move track to resolve the outcome of the battle.