Over the past many weeks the forces of Graziani and O’Conner have been building for a big game in Egypt, 1940. We finally got a lot of troops on table and had a right ’ol bash. I was able to field both my Italians in M33 Helmet and the new Blackshirts in Sun helmet and the English served up their best.

For the multi player action we default to Bolt Action as the rules of choice mostly for convenience as everyone is pretty much across the game and it’s easy enough to pull together for all the players concerned.

The forces in the game were quite large, involving 30 or so individual units per side. This makes individual command dice ‘pulls’ to slow and impractical as per the standard rules. Therefore we fiddled with the command element of BA by using dice designated as being able to activate 2 units of the same type (infantry, armour, artillery, etc), a 3 dice that enables any three units to activate and a ‘blitzkrieg’ dice that enabled any 4 units to activate at a time. This allowed for some level of combinations and co-ordination to be put together as well as keeping the number of dice in the bag down to about 10 per side, this keeping the game moving along.

This all worked out pretty well. The game was about 2800pts per side in BA speak and was done and dusted in an afternoon.

The scenario revolved around an Italian Blackshirt platoon deployed in a small town on the outskirts of the larger town of El Kayeb somewhere near the Egyptian/Libyan border. This town was key to controlling access to the town and thus needed to be defended. The game had flank marches and reserve force deployments from both sides, juxtaposed with an attack/defend on the small town of Al-El-Kayeb resulting in a very fluid engagement.

So, with that here is a brief AAR to show off the new desert table layout, a rather handsome 14’ x 6’ of lovely terrain and miniatures, with the garrison Blackshirts assailed by a mechanised British Western Desert Force.

Italian Blackshirts deploying town to man the defences for the expected assault. 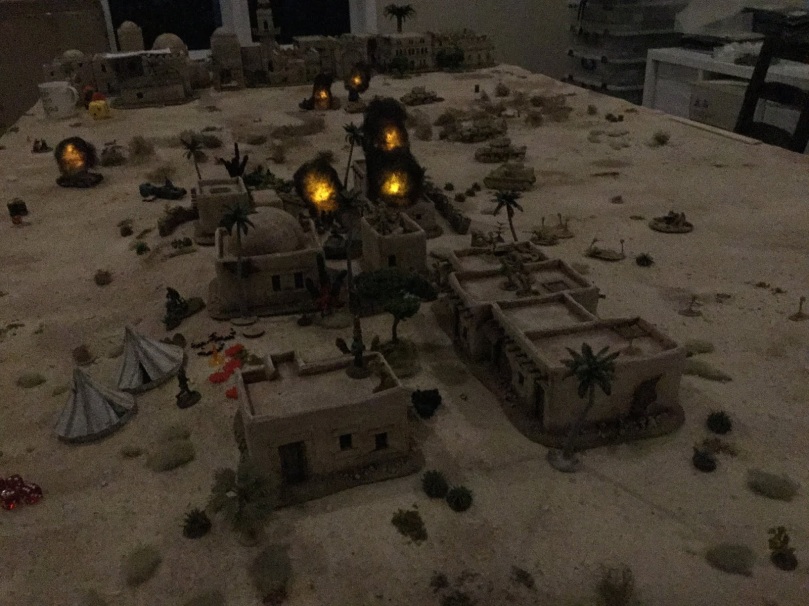 An excellent game, with many high points and low points for both sides. The Italians had a nice early run at it but the British were able to move on Al-El-Kayeb through a succession of dice activations and assault the Blackshirt defenders.
The British armour then made their presence felt and the overrun of both flanks sealed the victory for ol’ blighty….
Despite the apparent ‘easy’ British victory the game was in the balance right up to the last turn…